This tutorial shows how to exploit the capabilities of the Python wrapper to couple SU2 with an external structural solver. The problem at hand consists in a NACA 0012 airfoil, free to pitch and plunge, with given stiffnesses, immersed in a flow with varying Mach number. The two frequencies of the modes of the structure will vary as the speed is increased, reaching a point when the aeroelastic system will be unstable. The classical pitch-plunge flutter will then be visible.

The considered case has been presented in \(^1\), the reader is encouraged to refer to that reference for further details on the problem.

The structual solver used in this example couples SU2 with the commercial code Nastran, keeping the results of general interest. Indeed, linear strctures of arbitrary complexity can be analysed with the same workflow.

Summarizing, this document will cover:

A sketch of the problem at hand is presented below: 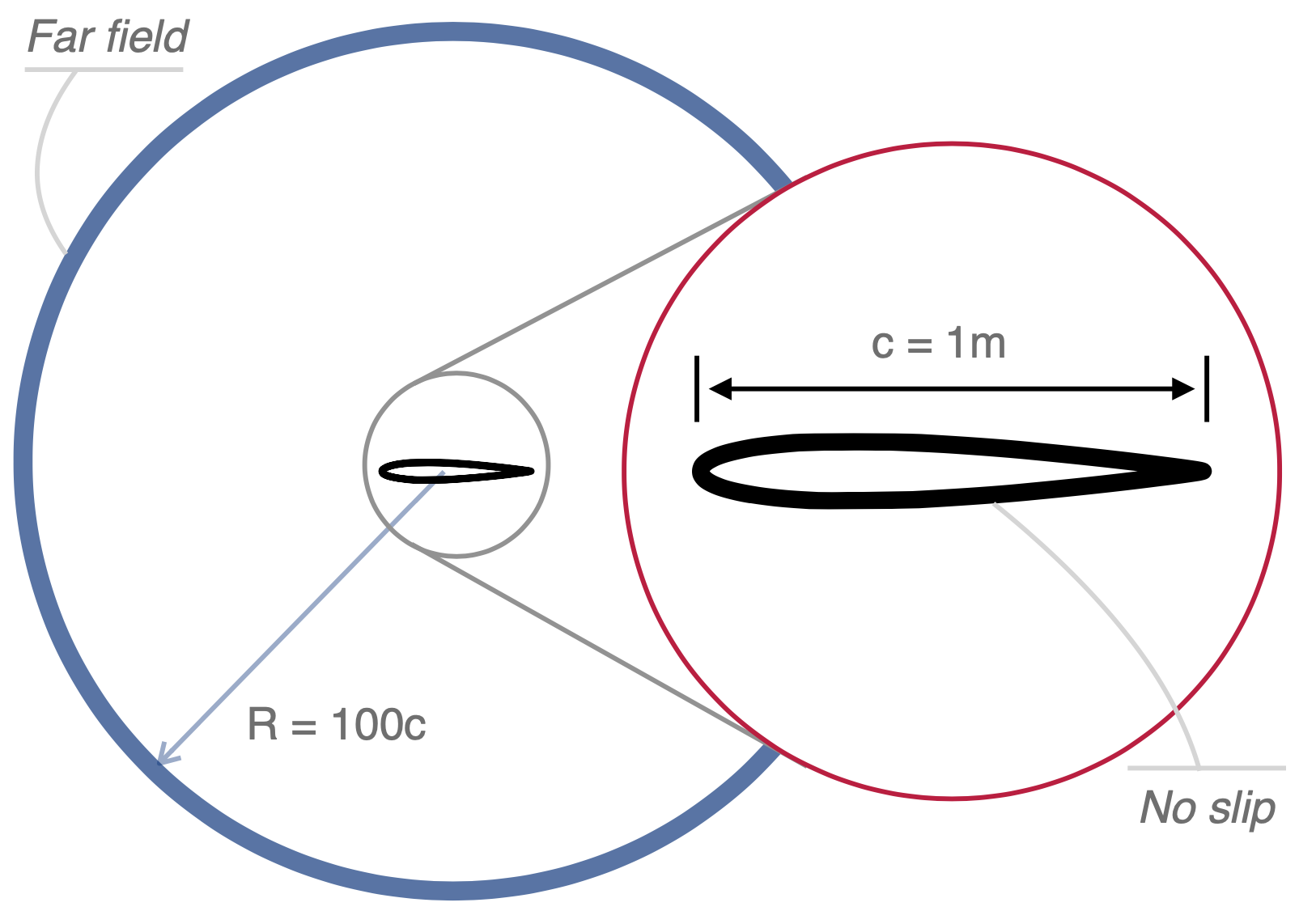 You can find the resources for this tutorial in this folder of the Tutorials repository. There is a matlab file that can be used to produce validation data with Theodorsen theory and the mesh file.

The solution process will follow a very similar flow as the one explained in this tutorial, which you should complete before stepping to the present one. The fluid and structural solutions will be obtained separately, iterating between them until convergence. Here, the difference is due to the fact that the simulation is unsteady. Thus, this inner iteration between fluid and struture will be repeated at each physical time step.

The structural model is made by a single point, positioned at the rotation axis, with two degrees of freedom, pitch and plunge. Inertia and mass of the airfoil are concentrated at the center of mass of the profile, at a certain distance from the rotation axis. The equations of motions are available analytically and read:

These equations are usually adimensionalised to obtain results independent from the free-stream density of the flow. Indeed, we can define the following parameters:

Note that, as we will vary the Mach number, the density will also change accordingly. Thus, with given nondimensional parameters, the inertias and stiffnesses must be varied accordingly.

No structural damping is included and a time step of 1ms is used.

The structural solver, instead of integrating the equations of motions for this point, which are available analytically, is intended to solve a general structural problem. For this reason, a preprocessing step in Nastran will be performed, computing the mode shapes and modal frequencies of the model. Then, the structural solver will integrate a set of ODEs for the modes of the structure.

To perform the preprocessing step, in the case control section of the Nastran model (i.e. at the very beginning of the file), the following lines must be added:

A real egeinvalue analysis will then be performed. This will produce, in the f06 file, an equivalent, ordered, model that will eventually be read by the python script to create the interface. Further, it will be created a punch file where all the mode shapes, together with modal stiffnesses, are stored.

IMPORTANT: The modes should be normalised to unit mass.

Further, in the Nastran model, a SET1 card must be added that contains all the nodes to be interfaced with aerodynamics. Note that, as of now, only one SET1 card is allowed. However, this should be sufficiently general not to create issues.

In the structural input file the keyword NMODES must then be defined to select which, of all the modes in the punch file, to be used.

In this particular case, it may look excessively complicated, but it allows to solve an arbitrary aeroelastic problem with the same scheme.

The fluid domain is discretised with 133k nodes, with refining close to the airfoil surface, in order to correctly represent the turbulent boundary layer. The first cell is placed at a height of \(y+\approx 1\). A close up view of the mesh is pictured below:

As far as the structural mesh is concerned, this is a finite element mesh prepared for the commercial code Nastran. In the context of this example, as only a 2D problem, with only two degrees of freedom, is considered, the mesh is extremely simple; a set of rigid elements that connect several slave nodes to the only master node, positioned on the rotation axis. The master node only has two degrees of freedom: pitch and plunge.

One of the slave nodes, at the position of the center of mass, houses the mass and inertia of the airfoil.

It should always be recalled that, if interpolation is needed between the structural and fluid meshes, RBF will be used. The limitation of this linear interpolation is due to the fact that, if a 2D problem is concerned, the structural points cannot all lie on the same line. Equivalently, if a 3D problem is tackled, the points cannot lie all in the same plane. For this reason, the thickness is represented in the FEM mesh for Nastran as shown below:

As you can see, the exact profile is not required. The interpolation will take care of displacing correctly the fluid mesh. However, thickness must somehow be represented.

Configuration File for the fluid zone

For this reason, the solver keyword is set as:

A new marker is introduced, MARKER_DEFORM_MESH_SYM_PLANE. This marker is effectively a symmetry marker for the mesh deformation only. It may be useful in cases where symmetry in the mesh is required, but not in the fluid simulation. An example may be the simulation of a plane half-model, in wind tunnel, where the effect of boundary layer on the tunnel walls must be studied, but a pitch movement of the model is also allowed. Fluid symmetry cannot be used, but at the same time the mesh should move on the tunnel wall to match the deformation given by the pitch motion. However, in the context of this example, this marker is not required.

The only difference from a common single zone configuration file is the addition of the following lines:

Where we selected the airfoil as our marker for coupling.

The simulation is unsteady with a physical time step of 1ms:

The relative residual cannot be used as this is reset at each inner iteration. Thus, after the first inner loop, it would be difficult to obtain convergence as the absolute residuals are already quite low. For this reason we will use:

Configuration File for the solid zone

This configuration file will be read by the structural python solver included in SU2, that will read the preprocessed Nastran model.

The solver can work in two ways:

Available keywords for the config file:

We will call the Nastran model modal.bdf and, after the eigenvalue analysis, we will obtain the files modal.f06 and modal.pch.

In the context of our problem, the configuration file will read:

The modes are coupled. Thus, appropriate initial conditions, to obtain 5 degrees of pitch and no plunge, must be obtained from the mode amplitudes at the master node.

Configuration File for the interface

The most important interface configuration keywords are:

The preprocessing step in Nastran has already been performed, thus you will directly find the required structural model.

If you built you version of SU2 in parallel, run instead:

Substituting X with the appropriate number of cores.

You will see, after the usual preprocessing steps, the following output:

In these steps, an initial deformation is imposed, if required, and the mesh is deformed accordingly. Afterwards, the computation can start:

This is the typical output that you will see. There was no initial deformation imposed and for this reason you can see that the mesh deformation system was solved by the initial guess. FSI iteration is the inner iteration index, and it will keep increasing until the inner convergence is found. Then, this index will be set to zero and the time iteration will be increased.

After all the computations are completed (i.e. for all the Mach numbers), in each case folder you will see a file called StructHistoryModal.dat. The first rows of this file, for Mach number 0.1, are reported below.

The first column contains the physical time (please note that we started the fluid-structure coupling after 99 time iterations), the second one contains the time iteration, the third one the number of FSI iterations required for convergence, then we have the time histories of the modes and their derivatives.

For many applications this may be already the desired output. However, in this case, we actually want the physical rotation and displacement of the point at the rotation axis. A post processing step must be performed to multiply the mode shapes for their amplitude. This can be done with the provided matlab file. You only need to run the Main_compare.m file and it will take care of all the required operations.

Please note that those files are absolutely general. Thus, feel free to reuse them for other models.

At the end of the matlab run, you will see outputs as the ones reported below. 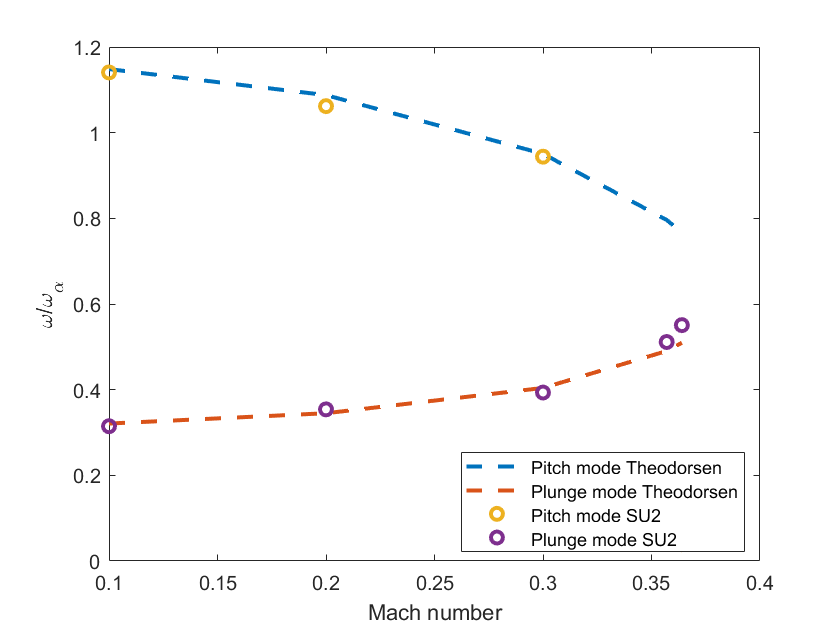 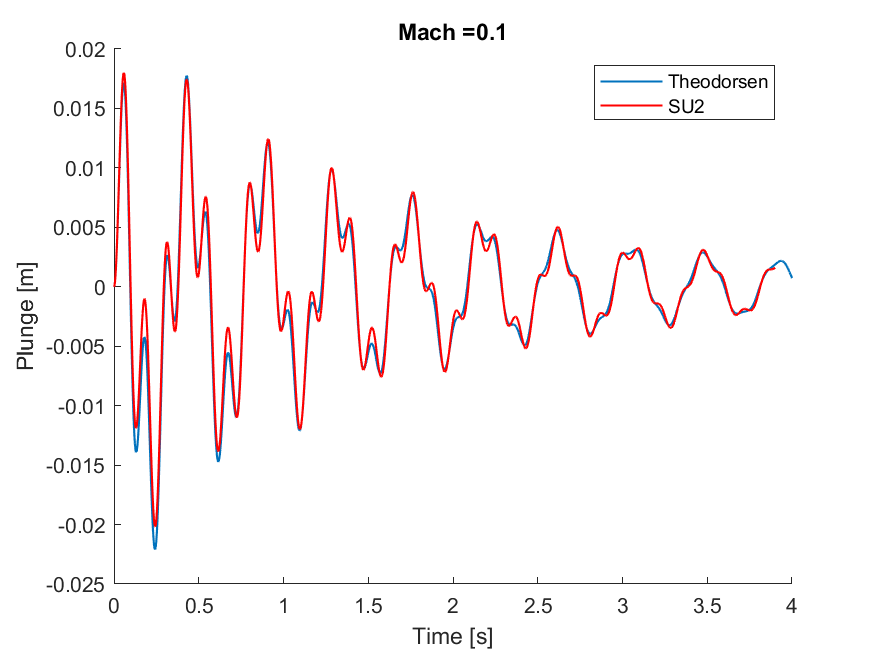 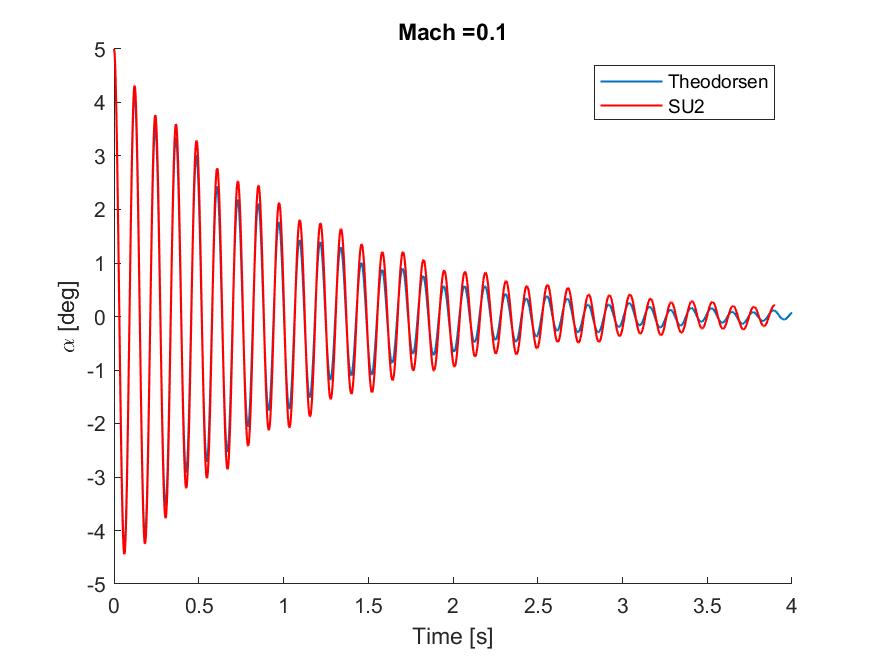 You can see how the frequency merging is well captured; after the flutter point the two frequencies are coincident and nonlinear effects are present. Thus, comparing the Theodorsen theory and SU2 is not fully meaningful. The time histories also match nicely.

This work is licensed under a Creative Commons Attribution 4.0 International License