It is assumed, that the user is familiar with the shape optimization capabilities of SU2 in steady state flows, which are explained in the previous tutorials. Upon completing this tutorial, the user will be familiar with perfoming an optimization of a viscous, unsteady, periodic flow about a 2D geometry using the URANS equations. The specific geometry chosen for the tutorial is the classic NACA0012 airfoil. Consequently, the following capabilities of SU2 will be showcased in this tutorial.

This tutorial uses the windowing techniques explained in here, to compute meaningful optimization objectives. Hence it is recommended to read that tutorial first.

The resources for this tutorial can be found in the design/Unsteady_Shape_Opt_NACA0012 directory in the project website repository.

The following tutorial will walk you through the steps required when performing a shape optimization of the NACA0012 airfoil using SU2. The tutorial will also address procedures for parallel computations. To this end, it is assumed you have already obtained and compiled SU2_CFD and its adjoint capabilities. If you have yet to complete these requirements, please see the Download and Installation pages.

This test case is for the NACA0012 airfoil in viscous unsteady flow. The NACA airfoils are two dimensional shapes for aircraft wings developed by the National Advisory Committee for Aeronautics (NACA, 1915-1958, predeccessor of NASA). The NACA-4-Digit series is a set of 78 airfoil configurations which were created for wind-tunnel tests to explore the effect of different airfoil shapes on aerdynamic coefficients as drag or lift.

The computational domain consists of a grid of 14495 quadrilaterals that surrounds the NACA0012 airfoil. Note that this is a very coarse mesh, and should one wish to obtain more accurate solutions for comparison with results in the literature, finer grids should be used.

This problem will solve the flow about the airfoil with these conditions:

These subsonic flow conditions will cause a detached flow about the airfoil, that exhibts a vortex street and is therefore periodic for the baseline geometry. Depending on the windowing-function used to average the optimization objective, the flow about the optimized geometry will eventually be a steady state flow.

We want to solve an optimization problem with a time dependent system output, e.g. Drag. A meaningful objective and constraint function is therefore a time average over a period. The period average is approximated by a windowed time-average over a finite time-span \(M\)

where \(C_D(\sigma, t)\) denotes the drag coefficient. \(C_D(\sigma, t)\) depends on time \(t\) and the design parameters \(\sigma\). The window-function is denoted by \(w\). There are different windows available. Depending on their smoothness, they have different regularizing effects on the time-average and its sensitivity and therefore, the windowed time-average converges with different speed to the period-average. The following options are implemented:

For each optimization run, we have to compute the sensitivity of above windowed time-average, which reads 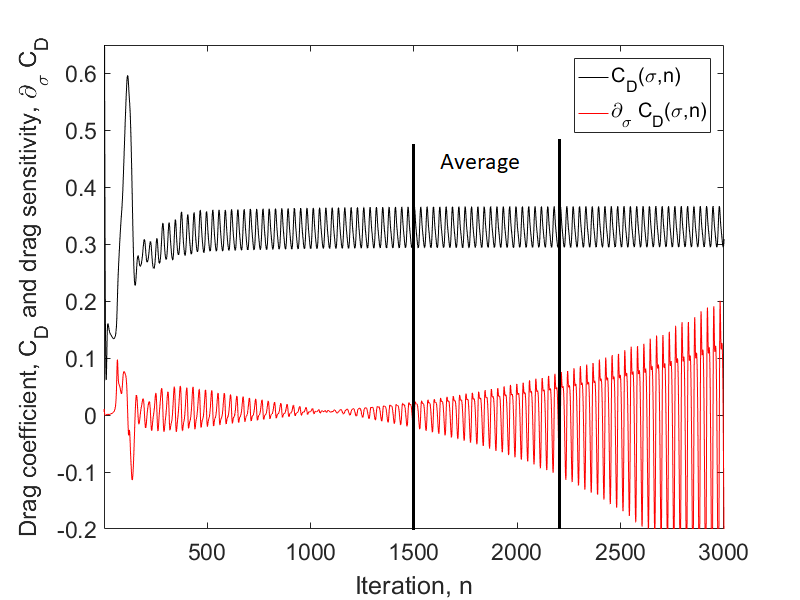 Using the midpoint rule for above integral, we arrive at the following constrained optimization problem

Furthermore, we specify the time frame to average the optimization objective. The starting iteration is given by WINDOW_START_ITER and the final iteration is the final time-step of the simulation. The windowing-function can be specified using the option WINDOW_FUNCTION.

To compute the sensitivity of the optimization objective and constraint, SU2 uses an adjoint iterator. This means, sensitivies are calculated using a dual time-stepping method similar to the one used for the direct simulation. Asymptotically, the convergence speed of the adjoint inner iteration matches the speed of the direct inner iteration. However, it may happen that the adjoint inner iterator needs more iterations to reach a steady state. Make sure that the option INNER_ITER is chosen big enough in your test case to get correct sensitivity results.

The optimization problem is given by the following known options.

With each design iteration, the direct and adjoint solutions are used to compute the objective function and gradient, and the optimizer drives the shape changes with this information in order to minimize the objective. Each flow constraint requires the solution of an additional adjoint problem to compute its gradient (lift in this case). Two other SU2 tools are used in the design process here: SU2_DOT to compute the gradient from the adjoint surface sensitivities and input design space, and SU2_DEF to deform the computational mesh between design cycles. To run this case, follow these steps at a terminal command line: 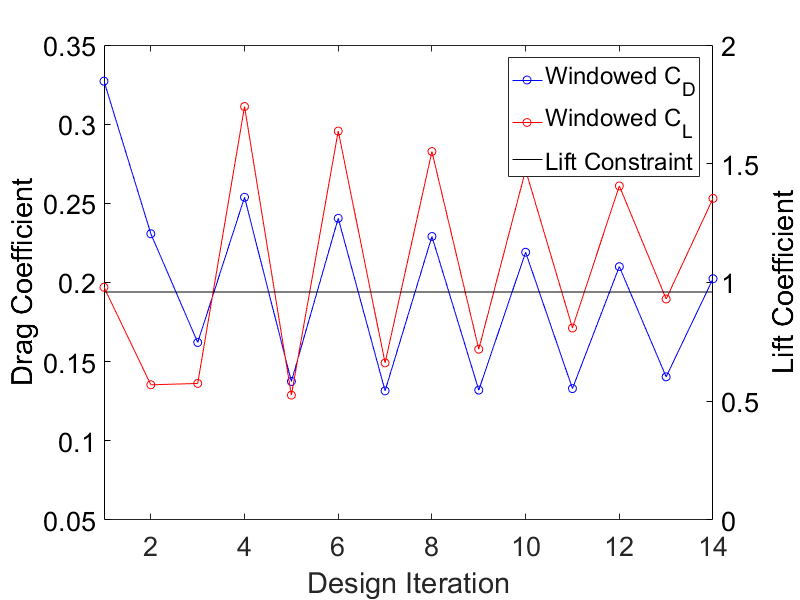 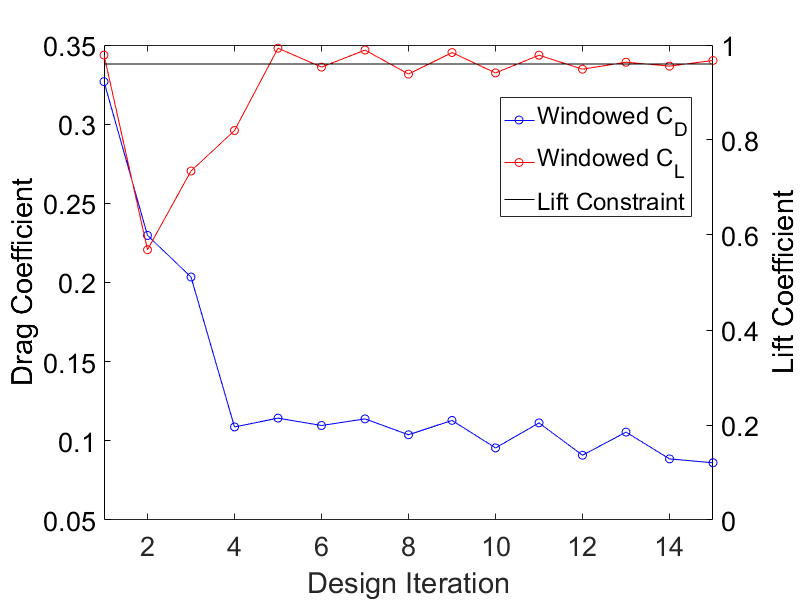 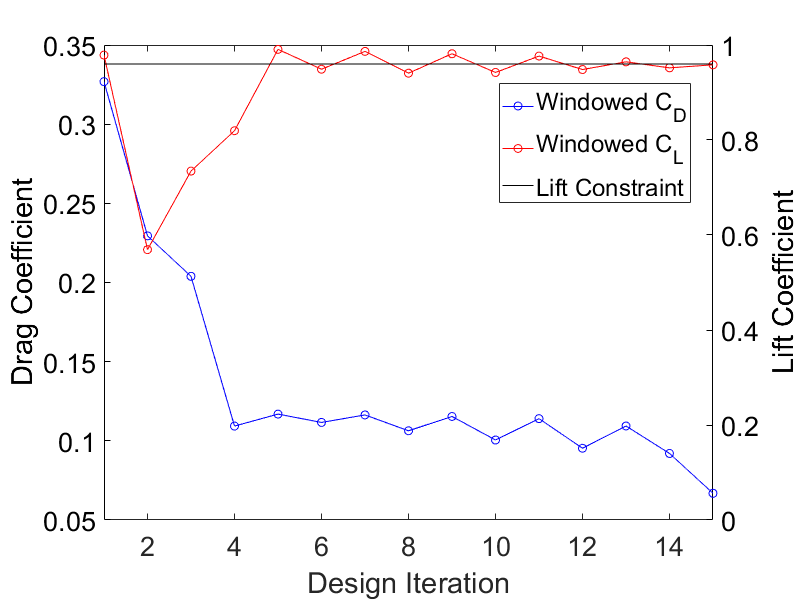 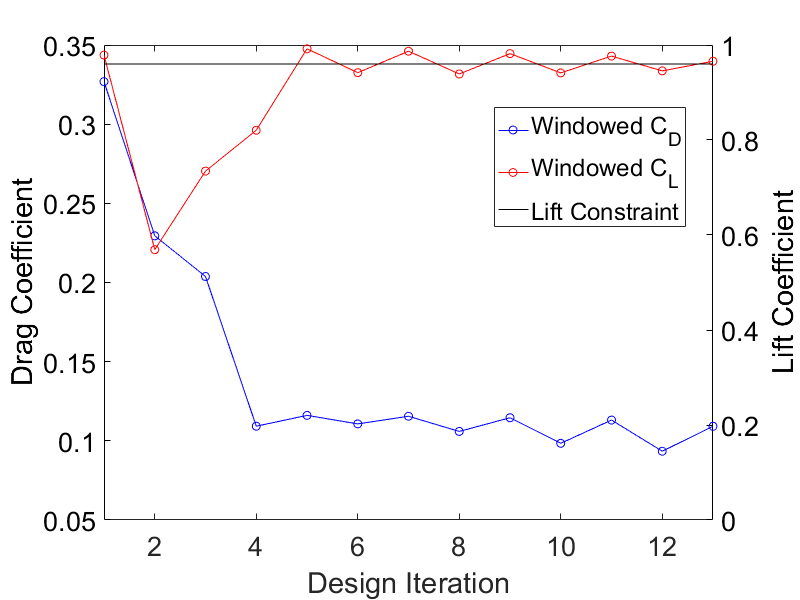