Figure (1): An unsteady, periodic flow field. The detached flow about the airfoil results in a vortex street that repeats itself after some time.

Upon completing this tutorial, the user will be familiar with performing a simulation of external, viscous, unsteady periodic flows around a 2D geometry using a turbulence model. The specific geometry chosen for the tutorial is the classic NACA0012 airfoil. Furthermore, the user is introduced in the so-called windowing approach, a regularizing method for time averaging in unsteady periodic flows. Consequently, the following capabilities of SU2 will be showcased in this tutorial:

This tutorial also provides an explanation for properly setting up viscous, compressible, unsteady 2D flow conditions in SU2. We also introduce a new type of time-convergence criteria for periodic flows, which monitors the change of the time-average of a specific objective, such as lift or drag, in order to assess convergence.

The following tutorial will walk you through the steps required when solving for the flow about the NACA0012 airfoil using SU2. The tutorial will also address procedures for both serial and parallel computations. To this end, it is assumed you have already obtained and compiled SU2_CFD. If you have yet to complete these requirements, please see the Download and Installation pages.

This test case is for the NACA0012 airfoil in viscous unsteady flow. The NACA airfoils are two dimensional shapes for aircraft wings developed by the National Advisory Committee for Aeronautics (NACA, 1915-1958, predeccessor of NASA). The NACA-4-Digit series is a set of 78 airfoil configurations, which were created for wind-tunnel tests to explore the effect of different airfoil shapes on aerdynamic coefficients as drag or lift.

This problem will solve the flow about the airfoil with these conditions:

These subsonic flow conditions cause a detached flow on the upper side of the airfoil, which result in a vortex street and therefore periodic behavior.

The computational domain consists of a grid of 14495 quadrilaterals, that sourrounds the NACA0012 airfoil. Note that this is a very coarse mesh, and should one wish to obtain more accurate solutions for comparison with results in the literature, finer grids should be used. 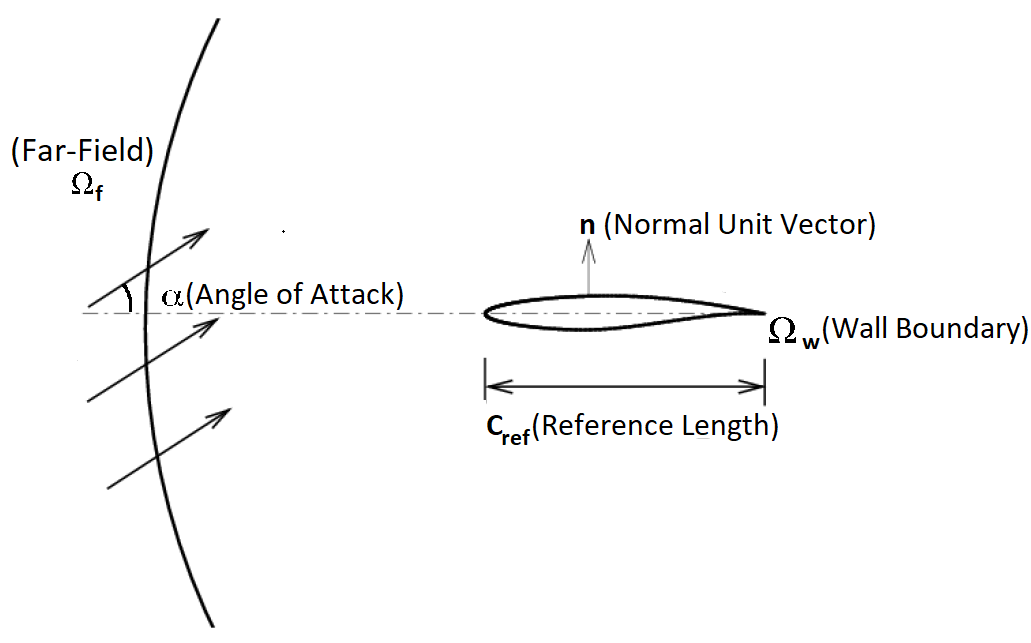 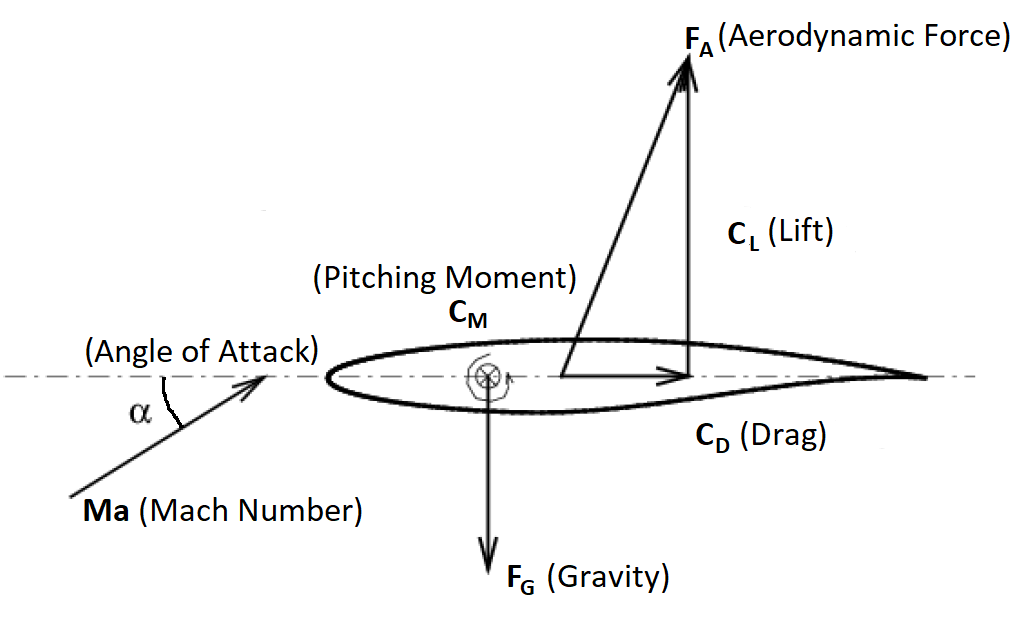 Figure (3): Close-up view of the airfoil surface and the aerodynamic coefficients.

Configuration of the physical problem is similar to the ONERA M6 tutorial, that one can access here. However, contrary to the ONERA M6 case, here a unsteady simulation is performed, hence, the Unsteady RANS (URANS) equations in 2D must be solved. Unsteady simulations in SU2 are computed by employing a dual time-stepping scheme. To this end, one first performs a spatial discretization as explained in the ONERA M6 tutorial. After that, a time discretization in physical time is performed, that results in a residual equation of the form

Here, \(n\) denotes the current physical time iteration, \(N\) is the final (physical) time of the simulation, and \(R\) is the residual, one has to solve. In this tutorial, a second order BDF scheme is employed. The idea of dual time-stepping is, that the current solution \(u^n\) of the residual equation is computed for each time step by solving an ordinary differential equation in pseudo time \(\tau\). The ODE for physical time-step \(n\) reads

This unsteady simulation results in a periodic flow, which can be seen by the vortex street in the flow visualization above. However, since the initial conditions are set to free-stream conditions, a couple of iterations are needed to reach the periodic state. This time-span is called transient phase. 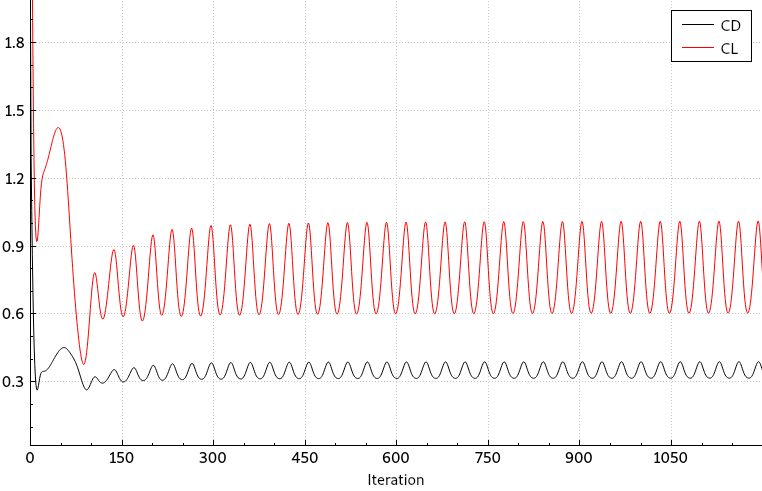 Usually in a periodic flow an instantaneous output value, e.g. \(C_D(t)\), is not meaningful. Hence one often uses the average value of one period \(T\):

However, the exact duration of a period is unknown or cannot be resolved due to a too coarse time discretization. Therefore, one averages over a finite time-span \(M\), which lasts a couple of periods and hopes for convergence to the period-average

If one employs a weighting function \(w(t)\), called window-function, the time-average converges faster to the actual period-average

A windowing function is a function, that is zero on its boundaries \(0\) and \(M\) and has integral \(1\). The iteration to start the windowed time-average is specified with WINDOW_START_ITER. Note, that at this iteration the transient phase of the flow must have passed. Otherwise a time average that approximates a period average is not meaningful. The windowing function can be specified with the option WINDOW_FUNCTION. Note, that windowing functionality also works for sensitivities of time dependent outputs. In this case, the order of convergence is reduced by 1. The following options are implemented: 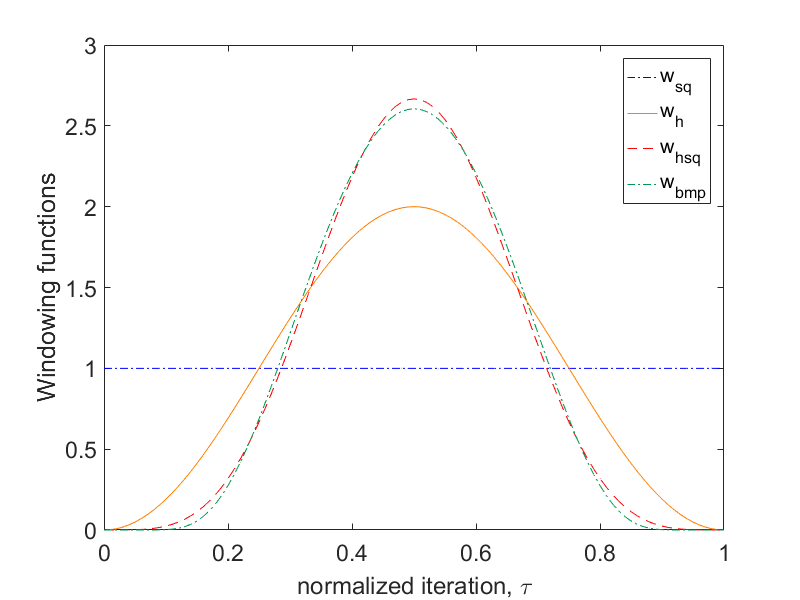 Figure (5): Different window-functions in the time span from 0 to 1.

The SQUARE-window denotes the case of uniform weighting by 1, i.e. the case, where no windowing-function is applied. It is not recommended to use SQUARE- windowing for sensitivities, since no convergence is guaranteed. For further information about the windowing approach, we refer to the work of Krakos et al. (Sensitivity Analysis of Limit Cycle Oscillations). The windowed time-averaged output-field can be accessed in SCREEN_OUTPUT by adding the prefix TAVG_ to the chosen output-field. For time-averaged sensitivities, one adds the prefix D_TAVG_.

The windowing functionality can also be used to monitor time convergence. Similar to the steady-state case, a Cauchy-criterion can be employed for flow coefficients. The Cauchy-criterion is applied to the windowed time-average from the iteration specified by WINDOW_START_ITER + CONV_WINDOW_STARTITER up to the current iteration. The field or the list of fields to be monitored can be specified by CONV_WINDOW_FIELD.
The solver will stop, if the average over a certain number of elements (set with CONV_WINDOW_CAUCHY_ELEMS) is smaller than the value set with CONV_WINDOW_CAUCHY_EPS. The windowed time-averaged Cauchy criterion can be activated by setting WINDOW_CAUCHY_CRIT = YES (default is NO). If a list of multiple convergence fields is chosen, the sovlver terminates, if the Cauchy criterion is satisfied for all fields in the list.

Usually a case is not purely periodic, but the period-mean has a slight shift upwards or downwards. Hence, the time-convergence epsilon value is typically not as small as in the time-steady case.

As one can see in Fig. (4), the transient phase of drag (and lift) is about 500 iterations, thus a suitable starting time for the windowed-average is WINDOW_START_ITER=500. To skip the transient phase (and speed up the tutorial a bit), a restart solution is provided.

The wing mesh should fit on a single-core machine. To run this test case in serial, follow these steps at a terminal command line:

If SU2 has been built with parallel support, the recommended method for running a parallel simulation is through the use of the parallel_computation.py Python script. This automatically handles the domain decomposition and execution with SU2_CFD, and the merging of the decomposed files using SU2_SOL. Follow these steps to run the ONERA M6 case in parallel:

Results for the turbulent flow about the NACA0012 airfoil are shown below. The first picture shows the time dependent drag (black) as well as the windowed average from iteration 500 up to the current iteration computed with different windowing-functions. The Hann-Square-windowed time-average set up in this tutorial is displayed by the red line. The simulation terminates at iteration 532, since then, the Cauchy time-convergence criteria are satisfied. The second picture shows a simulation, where the convergence criterion is deactivated. Note, that the Square-window oscillates much longer than the other windows, due to its low convergence order. 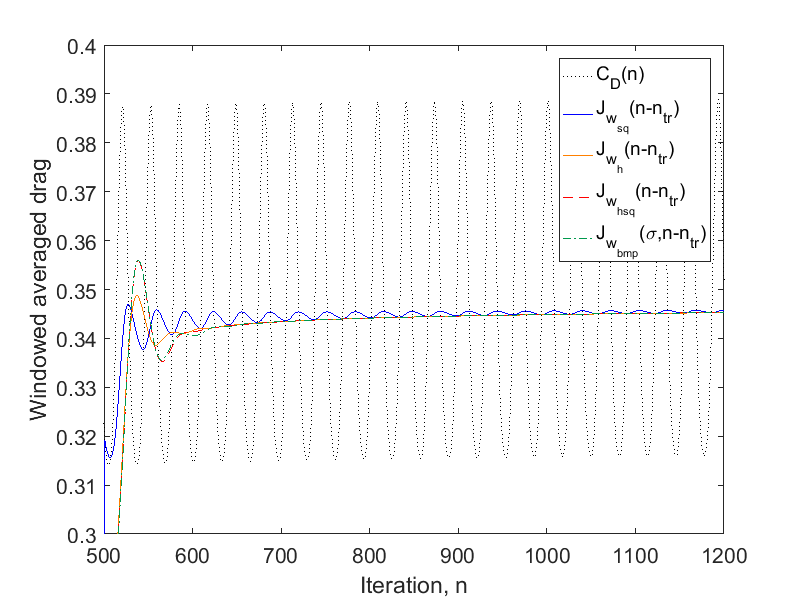 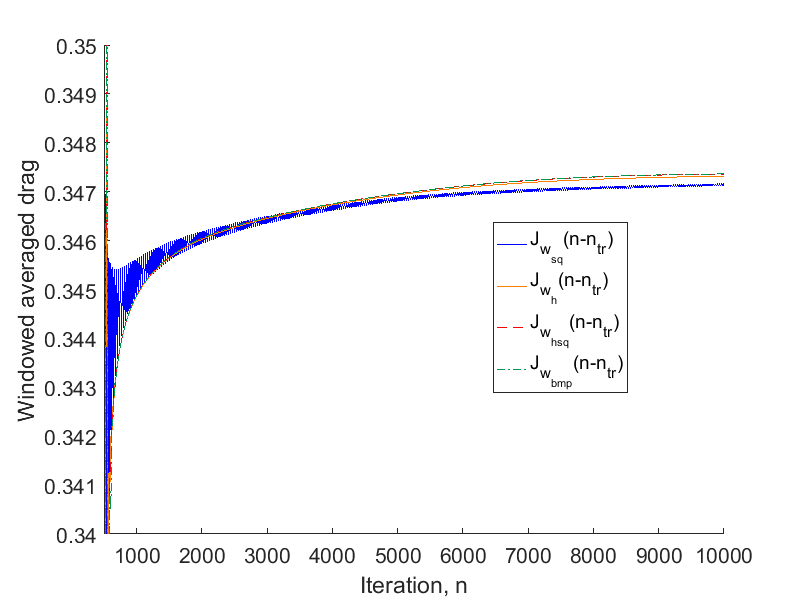