The problem that we will be solving consists of a vertical, slender cantilever, clamped in its base, and subject to a horizontal, distributed load \(P\) on its left boundary. This is shown in Fig. 1. 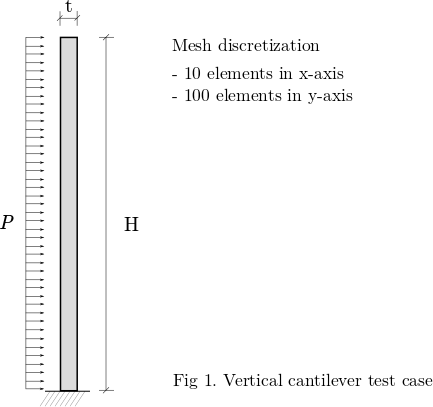 First, please make sure you have followed the installation guide and that you have SU2 up and running in your system. You will only need the SU2_CFD binary for this tutorial. If you are building the code from source, a single core version of the code is sufficient for this tutorial.

You can find the resources for this tutorial in the folder structural_mechanics/cantilever in the Tutorials repository. You will need the mesh file mesh_cantilever.su2 and the config file config_linear.cfg.

This tutorial covers the solution of static, solid mechanics problems. The mathematical problem that we will be solving has the well-known form

This tutorial will be solved the for the cantilever with the following conditions:

The cantilever is discretized using 1000 4-node quad elements with linear interpolation. The boundaries are defined as follows:

We start building the configuration file for SU2 (*.cfg). First of all, we need to determine the solver that we will be using. The keyword for structural problems is ELASTICITY, therefore

Structural problems can undergo both geometrical and material non-linearities. In this tutorial, we will be assuming small deformations and linear elastic material behaviour. We set these options using

The configuration requires to input a mesh file. The mesh that we will be using in this problem is provided for download here, in SU2 format. The options to be added to the config file are

It’s now time to set the boundary conditions of the problem. The load definition is, for this case, \(P(y, t) = P = 1.0 \textrm{kPa}\). To comply with our linear elasticity assumptions, we define \(P\) as a non-follower load, that is, the direction of the load remains constant throughout the simulation, in the x-axis (1, 0). This boundary condition is imposed in the boundary left as

where the 1.0 corresponds to the value of the load, and the 1000 is a multiplier to set the load in kPa. The direction of the load is finally set with the vector (1, 0, 0). Next, the clamped boundary is set as

Finally, it is required that every other boundary in the problem has a boundary condition imposed. This is because SU2 was originally designed as a Finite-Volume CFD solver, and this imposes some constraints over the boundary description. Therefore, we set the remaining boundaries to have a zero pressure,

The equation \(\mathbf{K} \mathbf{u} = \mathbf{F}\) is a linear system, which requires the use of the linear solvers implemented in SU2. There are several options available, and the choice depends on the particular properties of the problem being solved. In this case, we opt for a conjugate gradient solver with ILU preconditioner. The tolerance is set to 1E-8, and the number of iterations is fixed in 1000 to allow for the convergence of the solver.

Finally, the output of the solver needs to be set. We set the screen output to print out the residual of the linear solver in the x and y components of the displacement, and the maximum Von Mises Stress (VMS) in the structure.

In this case, we will write the volume file in Paraview format, as linear_elastic.vtk. The convergence file will be written as history.csv, which in this case will only consists of one line as the linear problem is computed in a single iteration. The binary restart file will be saved as restart_linear_elastic.dat.

This is a very small example that we will run in serial. To run this test case, follow these steps at a terminal command line:

For this particular problem, the solver should have run very quickly. The screen output of the code will go over your settings, before initializing the solver. Once done so, you will obtain an output such as

where rms[DispX] and rms[DispY] correspond to the residual of the linear solver in the x and y components of the displacements, and VonMises corresponds to the maximum Von Mises Stress in the structural domain. 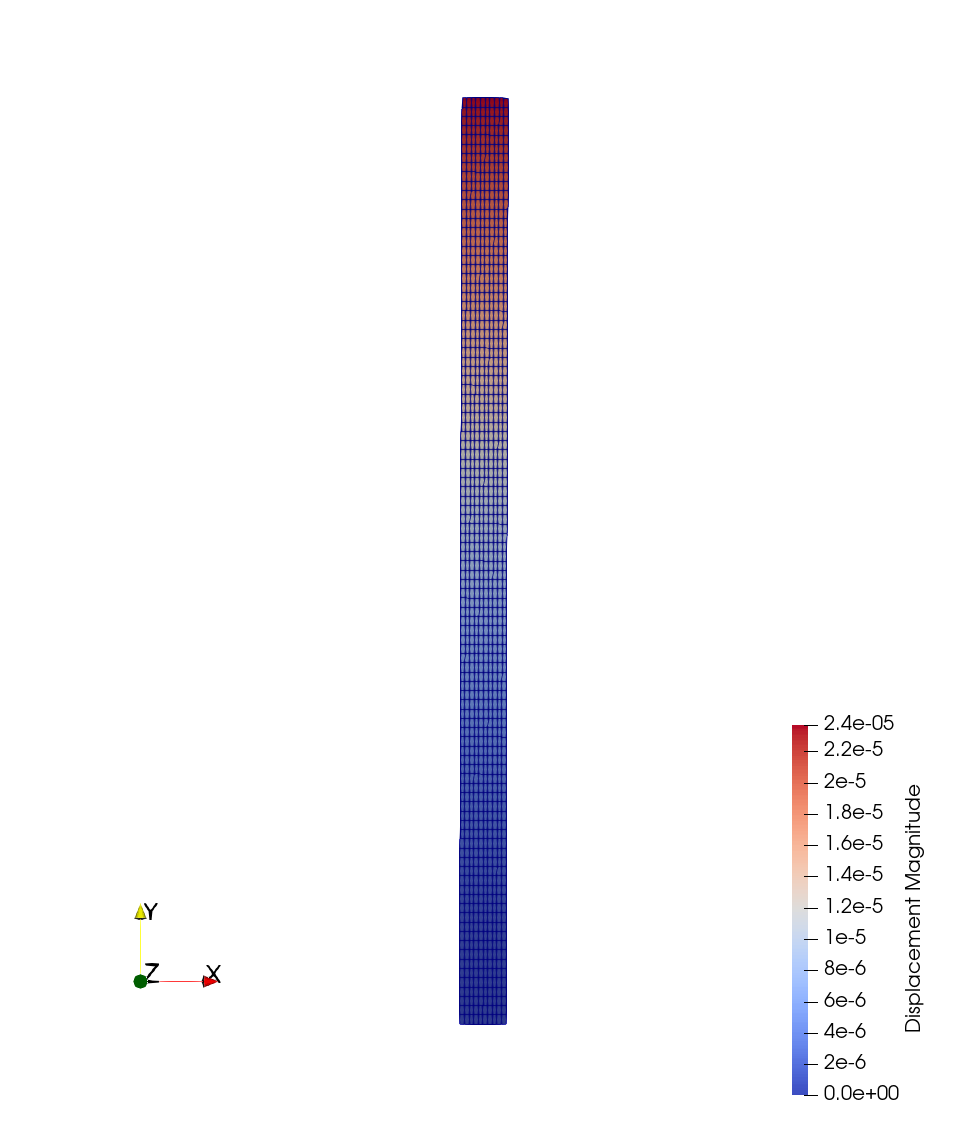 If you are using this content for your research, please kindly cite the following reference in your work:

This work is licensed under a Creative Commons Attribution 4.0 International License