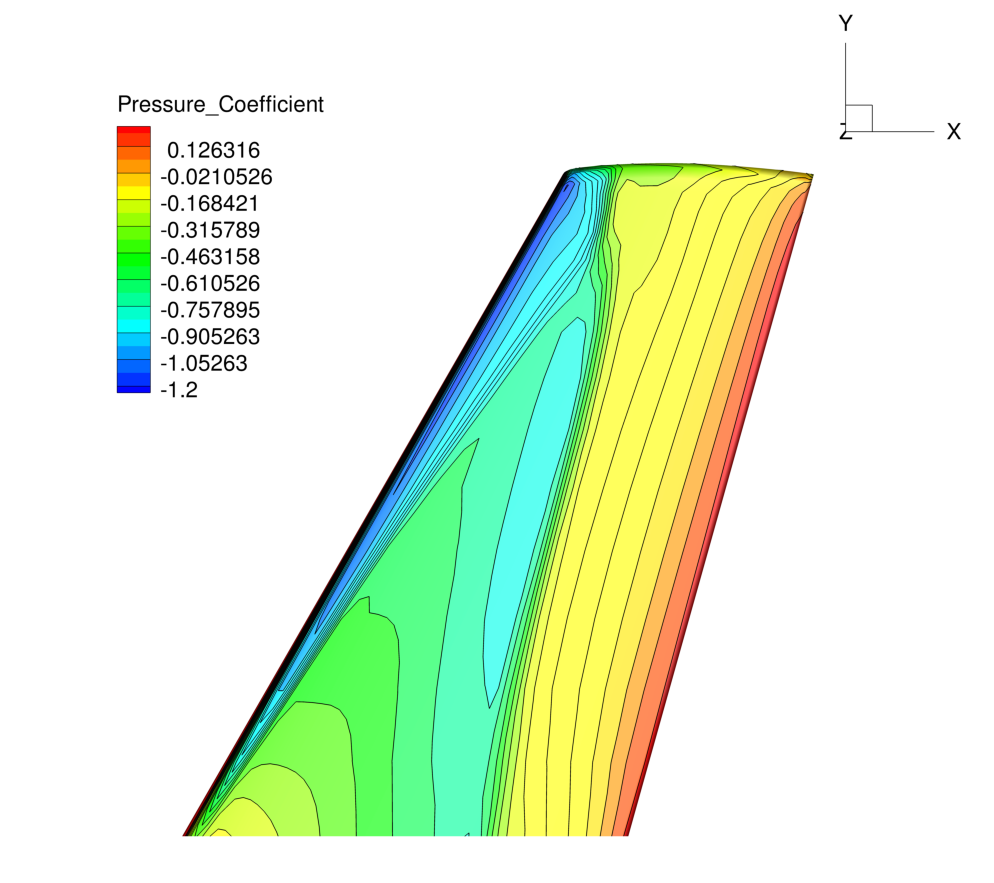 Upon completing this tutorial, the user will be familiar with performing a simulation of external, viscous flow around a 3D geometry using a turbulence model. The specific geometry chosen for the tutorial is the classic ONERA M6 wing. Consequently, the following capabilities of SU2 will be showcased in this tutorial:

This tutorial also provides an explanation for properly setting up viscous, compressible, 3D flow conditions in SU2. We also introduce a new type of convergence criteria which monitors the change of a specific objective, such as lift or drag, in order to assess convergence.

The resources for this tutorial can be found in the compressible_flow/Turbulent_ONERAM6 directory in the tutorial repository. You will need the configuration file (turb_ONERAM6.cfg) and the mesh file (mesh_ONERAM6_turb_hexa_43008.su2). It is important to note that the grid used in this tutorial is very coarse to keep computational effort low, and for comparison with literature, finer meshes should be used.

The following tutorial will walk you through the steps required when solving for the flow around the ONERA M6 using SU2. The tutorial will also address procedures for both serial and parallel computations. To this end, it is assumed you have already obtained and compiled SU2_CFD. If you have yet to complete these requirements, please see the Download and Installation pages.

This test case is for the ONERA M6 wing in viscous flow. The ONERA M6 wing was designed in 1972 by the ONERA Aerodynamics Department as an experimental geometry for studying three-dimensional, high Reynolds number flows with some complex flow phenomena (transonic shocks, shock-boundary layer interaction, separated flow). It has become a classic validation case for CFD codes due to the simple geometry, complicated flow physics, and availability of experimental data. This particular study will be performed at a transonic Mach number with the 3D RANS equations in SU2.

This problem will solve the flow past the wing with these conditions:

These transonic flow conditions will cause the typical “lambda” shock along the upper surface of the lifting wing.

The computational domain contains the wing half-span mounted on one boundary in the x-z plane. The mesh consists of 43,008 hexahedral elements and 46,417 nodes. Again, we note that this is a very coarse mesh, and should one wish to obtain more accurate solutions for comparison with results in the literature, finer grids should be used. 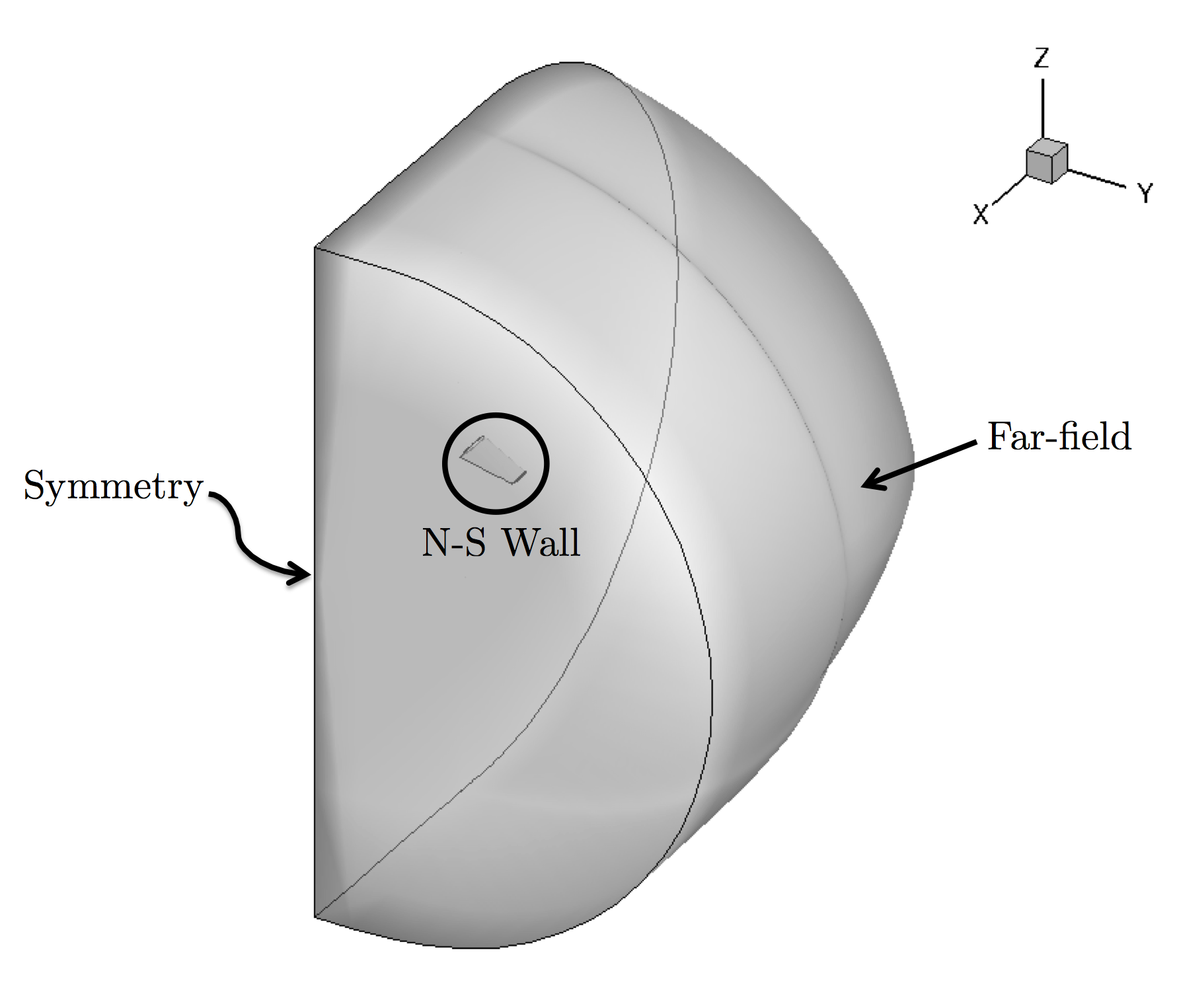 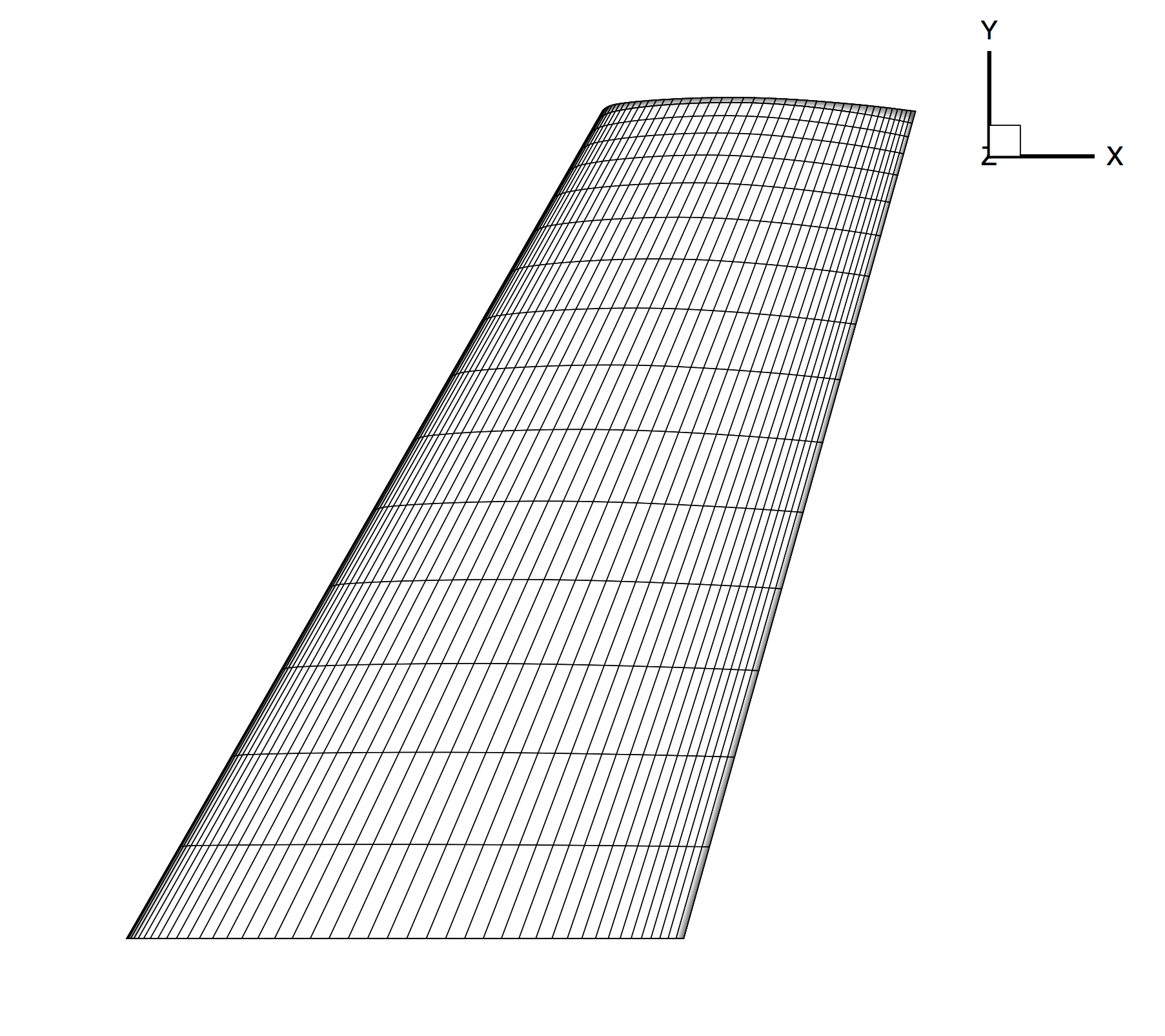 Figure (2): Close-up view of the structured surface mesh on the upper wing surface.

Several of the key configuration file options for this simulation are highlighted here. We next discuss the proper way to prescribe 3D, viscous, compressible flow conditions in SU2:

The options above set the conditions for a 3D, viscous flow. The MACH_NUMBER, AOA, and SIDESLIP_ANGLE options remain the same as they appeared for the inviscid ONERA M6 tutorial, which includes a description of the freestream flow direction.

For this problem, SU2 is using a calorically perfect gas model which is selected by setting the FLUID_MODEL to STANDARD_AIR. The fluid flow properties can be changed by selecting a different fluid model. In addition, the models for the transport coefficients can also be customized by exploring the viscosity and thermal conductivity options. By default with compressible flow, the laminar viscosity is governed by Sutherland’s law, and the thermal conductivity is assumed to depend on a constant Prandtl number.

Initialization of the flow field for compressible problems can be performed by multiple methods. The default method is to intitialize using the specified Reynolds number (INIT_OPTION= REYNOLDS) and free-stream temperature (FREESTREAM_OPTION= TEMPERATURE_FS), which will be used in this case. It is also possible to initialize the flow from thermodynamic quantities directly with INIT_OPTION= TD_CONDITIONS, in which case, the Reynolds number option will be ignored. Regardless of initialization method, we recommend that you always confirm the resulting initialization state in the console output during runtime of SU2 that is reported just before the solver begins iterating.

For a viscous simulation, the numerical experiment must match the physical reality. This flow similarity is achieved by matching the REYNOLDS_NUMBER and REYNOLDS_LENGTH to the original system (assuming the Mach number and the geometry already match). Upon starting a viscous simulation in SU2, the following steps are performed to set the flow conditions internally when INIT_OPTION= REYNOLDS and FREESTREAM_OPTION= TEMPERATURE_FS:

This method for setting similar flow conditions assumes that all inputs are in SI units, including the mesh geometry, which should be in meters. As described in the inviscid wedge tutorial, you can easily scale your mesh file to the appropriate size with the SU2_DEF module.

Rather than achieving a certain order of magnitude reduction in a residual to judge convergence, convergence of the drag coefficient is chosen for this problem. When a coefficient such as drag is chosen, we measure the change in the specific quantity of interest over a specified number of previous iterations. With the options selected above, the calculation will terminate when the change in the drag coefficient for the wing over the previous 100 iterations (CONV_CAUCHY_ELEMS) becomes less than 1E-6 (CONV_CAUCHY_EPS). A convergence criteria of this nature can be very useful for design problems where the solver is embedded in a larger design loop and reliable convergence behavior is essential.

The wing mesh should fit on a single-core machine. To run this test case in serial, follow these steps at a terminal command line:

If SU2 has been built with parallel support, the recommended method for running a parallel simulation is through the use of the parallel_computation.py Python script. This automatically handles the domain decomposition and execution with SU2_CFD, and the merging of the decomposed files using SU2_SOL. Follow these steps to run the ONERA M6 case in parallel:

Results for the turbulent flow over the ONERA M6 wing are shown below. As part of this tutorial a coarse mesh has been provided, but for comparison the results obtained by using a refined mesh (9,252,922 nodes) as well as experimental results are shown. 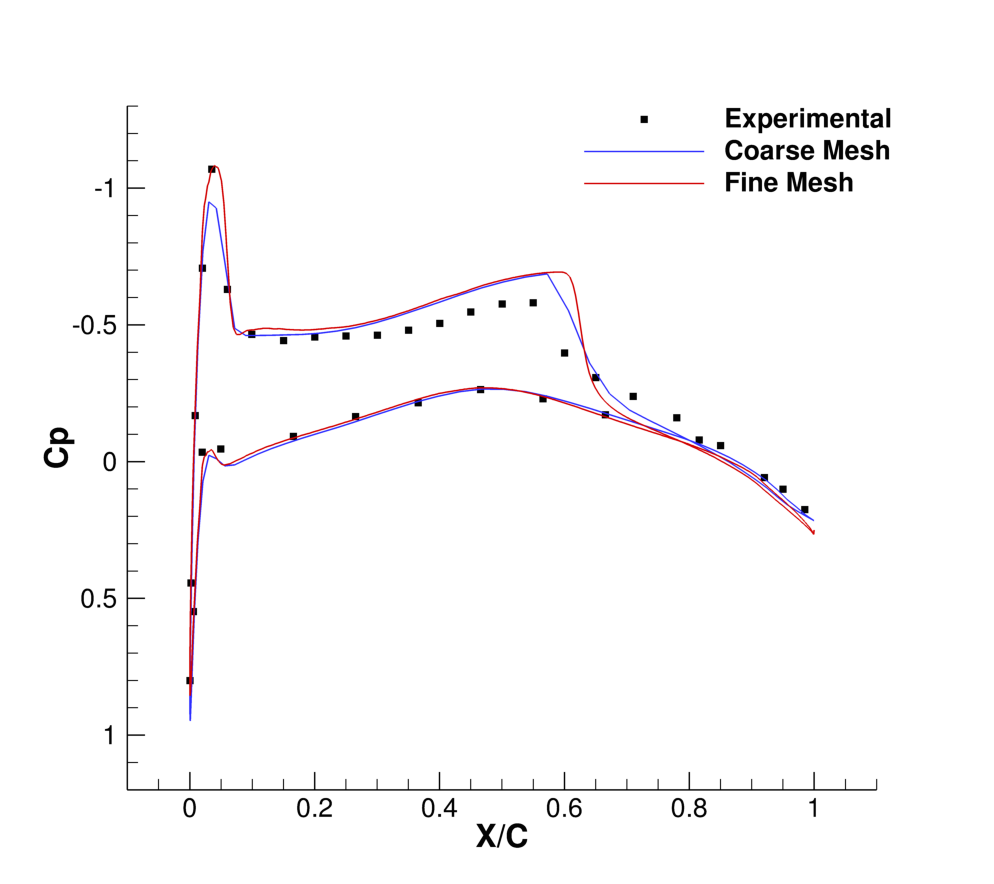 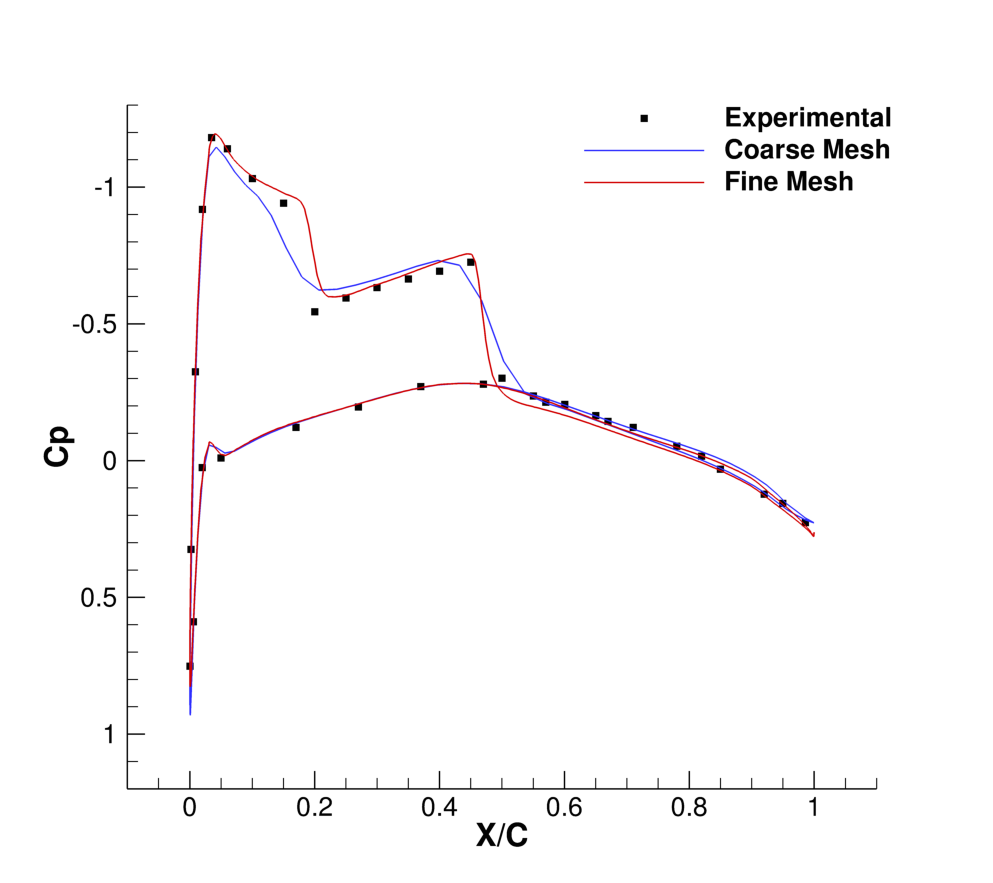 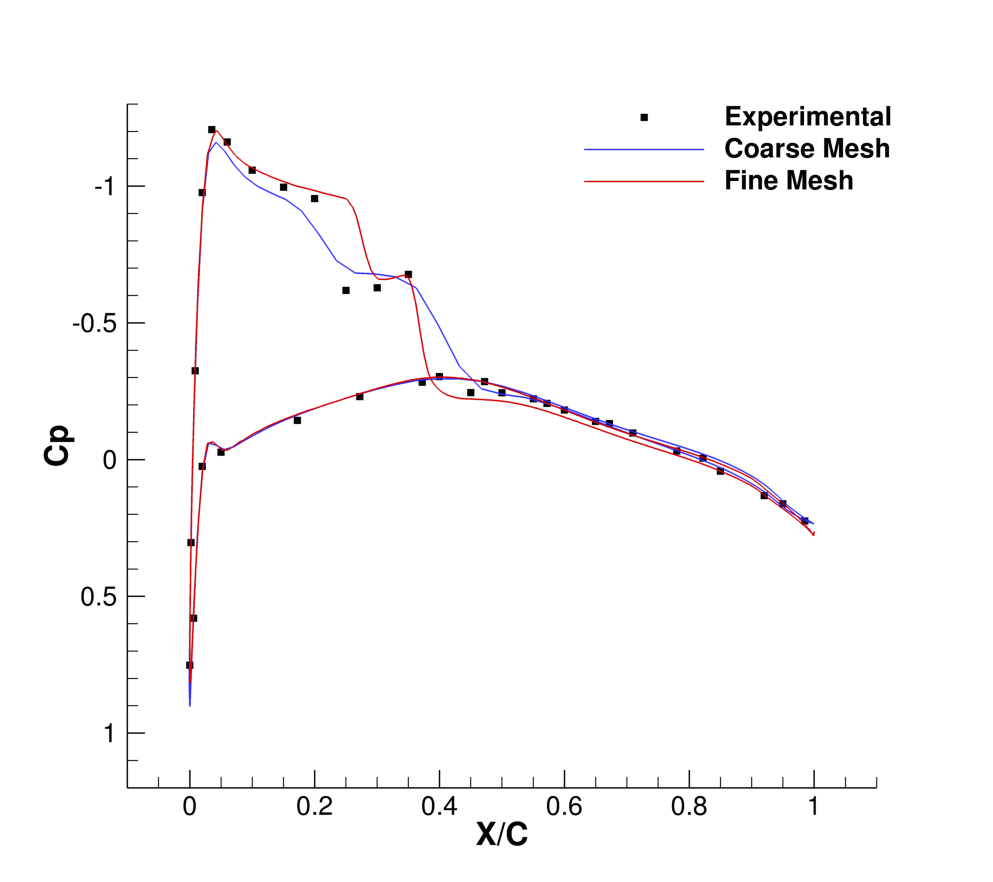 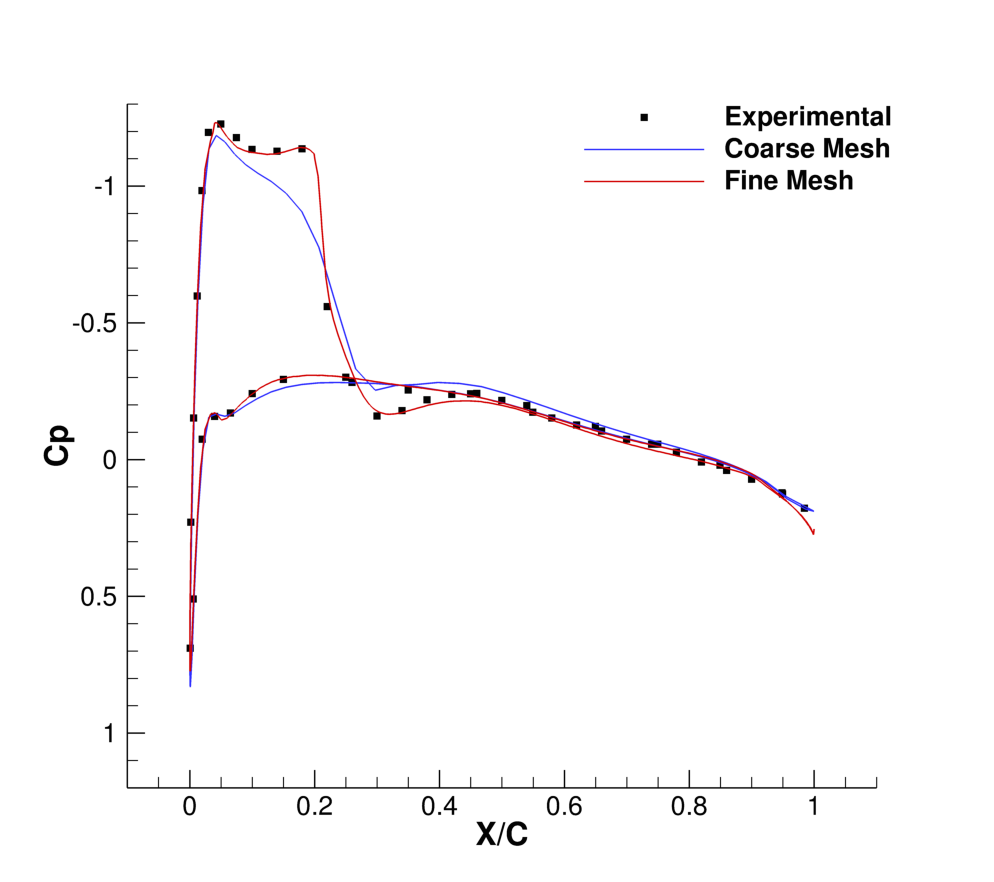