Unconstrained shape design of a transonic inviscid airfoil at a cte. AoA 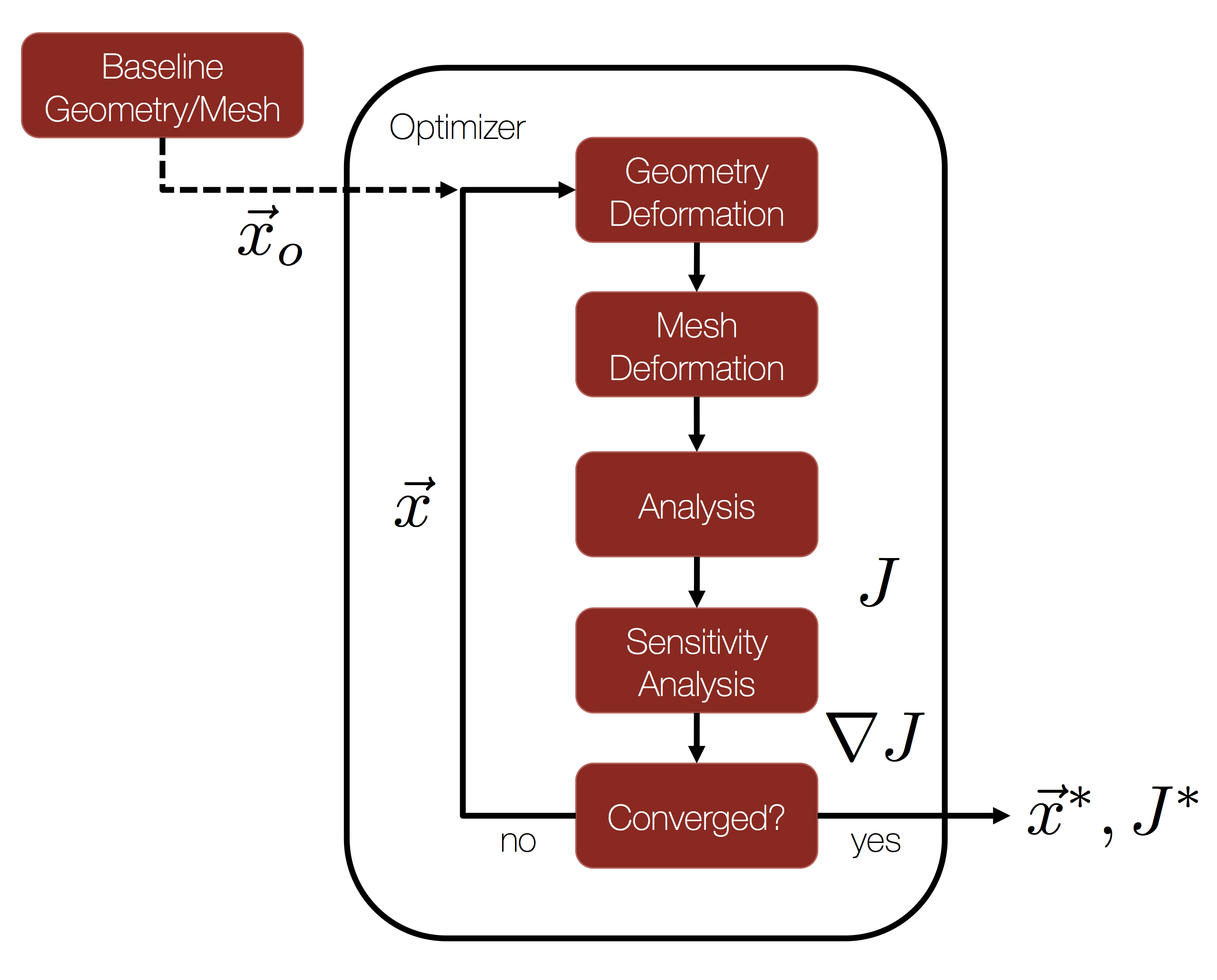 For this tutorial, we return to the classic NACA 0012 test case that was the subject of the Quick Start and perform aerodynamic shape design. Upon completing this tutorial, the user will be familiar with performing an optimal shape design of a 2D geometry. The initial geometry chosen for the tutorial is the NACA 0012 airfoil in transonic, inviscid flow. This tutorial is meant to be an introduction for using the components of SU2 for shape design in the context of a simple, unconstrained optimization problem. Consequently, the following SU2 tools will be showcased in this tutorial:

We will walk through the shape design process and highlight several options related to the continuous adjoint in SU2 and the configuration options for shape design.

You can find the resources for this tutorial in the folder design/Inviscid_2D_Unconstrained_NACA0012 in the project website repository. You will need the mesh file mesh_NACA0012_inv.su2 and the config file inv_NACA0012_basic.cfg.

The following tutorial will walk you through the steps required when performing shape design for the transonic airfoil using SU2. It is assumed that you have already obtained and compiled SU2_CFD, SU2_DOT, and SU2_DEF. The design loop is driven by the shape_optimization.py script, and thus Python along with the NumPy and SciPy Python modules are required for this tutorial. If you have yet to complete these requirements, please see the Download and Installation pages. It may also be helpful to review the Quick Start tutorial to refamiliarize yourself with this problem.

This example uses a 2D airfoil geometry (initially the NACA 0012) in transonic inviscid flow. See the Quick Start for more information on the baseline geometry.

The general process for performing gradient-based shape optimization with SU2 is given in the flow chart at the top of the page. We start with a baseline geometry and grid as input to our design cycle, along with a chosen objective function (J) and set of design variables (x). For this tutorial, we will use the NACA 0012 and the unstructured mesh from the Quick Start as our inputs with drag as our chosen objective and a set of Hicks-Henne bump functions to parameterize the shape.

From there, everything needed for automatic shape design is provided for you in the SU2 framework! By launching the shape_optimization.py script (described below), a gradient-based optimizer will orchestrate the design cycle consisting of the flow solver, adjoint solver, and geometry/mesh deformation tools available in SU2. This iterative design loop will proceed until a minimum is found or until reaching a maximum number of optimizer iterations. Many useful output files will be available to you at the conclusion.

The flow conditions of this numerical experiment are such that transonic shocks appear on the upper and lower surfaces, which causes drag. The goal of the design process is to minimize the coefficient of drag (Cd) by changing the shape of the airfoil. In other words, we would like to eliminate the shocks along the airfoil surface. This problem will solve the Euler and adjoint Euler (drag objective) equations on the NACA0012 airfoil at an angle of attack of 1.25 degrees using air with the following freestream conditions:

While more advanced design problems can be selected, such as those containing flow and/or geoemtric constraints, we will consider a simple unconstrained drag minimization problem here to get started. Please note that, because this is a 2D Euler problem without constraints, the expected minimum drag is going to be zero (or a small value due to numerical error in the spatial integration of the equation). To achieve that theoretical minimum will depend on the selected design variables and the ability of the optimizer to identify a global minimum.

The mesh consists of a far-field boundary and an Euler wall (flow tangency) along the airfoil surface. The mesh can be seen in Figure (2). 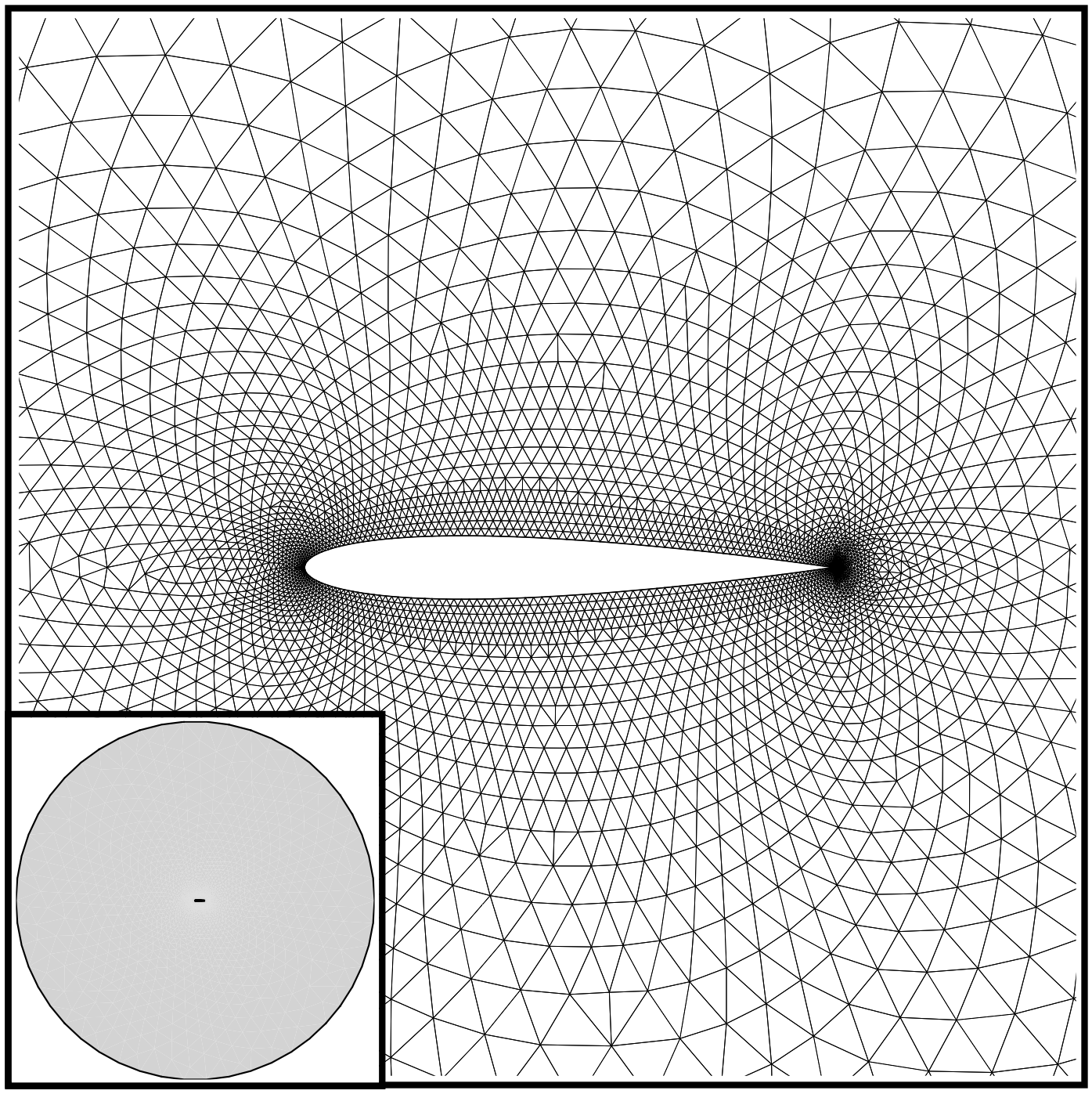 Figure (2): Far-field and zoom view of the initial computational mesh.

Several of the key configuration file options for this simulation are highlighted here. First, we note that we are choosing a drag objective with the first config option below. A number of objective functions are implemented in SU2, and we recommend that you check the config_template.cfg file in the root directory for a list of those that are available.

For this inviscid case, we have selected a modified version of the JST scheme for spatial integration of the adjoint equation. This 2nd-order, centered scheme affords us control over the level of dissipation applied to the problem. In particular, we control the higher-order dissipation (added everywhere in the solution) by modifying the 2nd entry in the ADJ_JST_SENSOR_COEFF option.

If you are having trouble converging your adjoint calculation, we often recommend adjusting the level of dissipation, along with reducing the CFL condition with the CFL_REDUCTION_ADJFLOW option, or even imposing a hard limit on the value of the adjoint density variable using the LIMIT_ADJFLOW option. While increasing the dissipation or limiting the adjoint variables can sometimes help to stabilize a solution, note that overly increasing the dissipation or imposing limits that are too strict can result in decreased accuracy. One should fully investigate the effect of these parameters, and ideally, a gradient accuracy/verification study should be performed (one can always compare against finite differencing).

As a side note, in case you are planning to use the discrete adjoint mode, SU2 software will not use these parameters unless you activate the option INCONSISTENT_AD

Now, we present the options that specify the optimal shape design problem:

Here, we define the objective function for the optimization as drag without any constraints. The OPT_GRADIENT_FACTOR of 1E-6 is chosen to reduce the value of the gradient norm (based on our experience, for the SLSQP python implementation a norm of the gradient ~1E-6 is desired) and OPT_RELAX_FACTOR of 1E3 is used to aid the optimizer in taking a physically appropriate first step (i.e., not too small that the optimizer is not able to detect a change in the objective function or too large that the subsequent calculations go unstable due to a large, non-physical deformation). We could impose a constraint on the maximum thickness, for instance, or add a lift constraint. Constraints will be discussed in the next tutorial on 3D design.

The SLSQP optimizer from the SciPy package for Python is the default optimizer called by the shape_optimization.py script. In addition to the hooks to the objective and gradient functions, this optimizer accepts options for the maximum number of optimizer iterations (OPT_ITERATIONS), requested accuracy (OPT_ACCURACY), and design variable bounds (OPT_BOUND_UPPER, OPT_BOUND_LOWER). During the optimization process, the SLSQP optimizer will call the flow and adjoint problems as necessary to take the next step in the design space. However, note that the optimizer will often make multiple function calls per major optimizer iteration in order to compute the next step size.

The DEFINITION_DV is the list of design variables. For the airfoil problem, we want to minimize the drag by changing the surface profile shape. To do so, we define a set of Hicks-Henne bump functions. Each design variable is separated by a semicolon, although note that there is no final semicolon at the end of the list.

It is quite common to introduce angle of attack as a design variable (with a given Cl). In that case, you should add to the config file the following extra information:

With this new setting the angle of attack design variable and the Cl constratint are indirectly introduced into the optimization problem without running an extra adjoint for the lift or grid deformation to account for the change in AoA.

The first value in the parentheses is the variable type, which is 1 for a Hicks-Henne bump function. The second value is the scale of the variable (typically left as 1.0). The name between the vertical bars is the marker tag where the variable deformations will be applied. Only the airfoil surface will be deformed in this problem. The final two values in the parentheses specify whether the bump function is applied to the upper (1) or lower (0) side and the x-location of the bump between 0 and 1 (we assume a chord of 1.0 for the Hicks-Henne bumps), respectively.

Note that there are many other types of design variables available in SU2, and each has their own specific input format. 3D design variables based on the free-form deformation approach (FFD) will be discussed in the next tutorial. 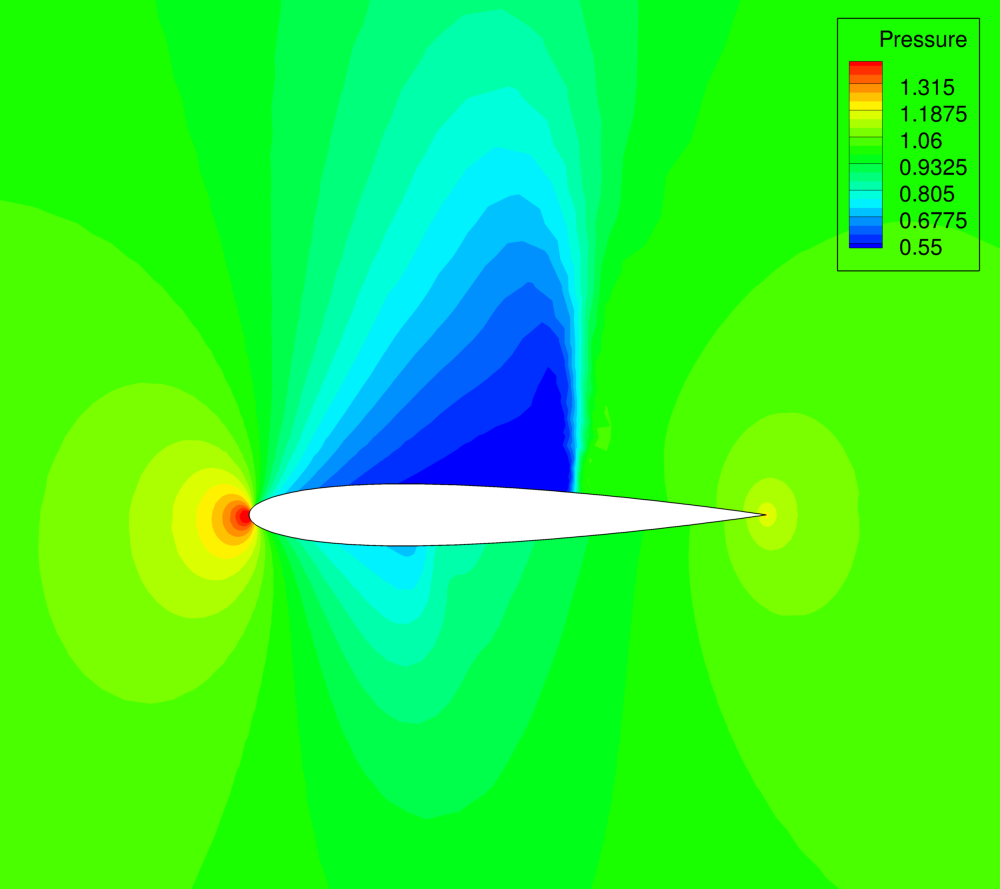 The continuous adjoint methodology for obtaining surface sensitivities is implemented for several equation sets within SU2. After solving the direct flow problem, the adjoint problem is also solved which offers an efficient approach for calculating the gradient of an objective function with respect to a large set of design variables. This leads directly to a gradient-based optimization framework. With each design iteration, the direct and adjoint solutions are used to compute the objective function and gradient, and the optimizer drives the shape changes with this information in order to minimize the objective. Two other SU2 tools are used to compute the gradient from the adjoint solution (SU2_DOT) and deform the computational mesh (SU2_DEF) during the process. Note that if a geometrical constrains is added, its value and gradient will be computed by SU2_GEO 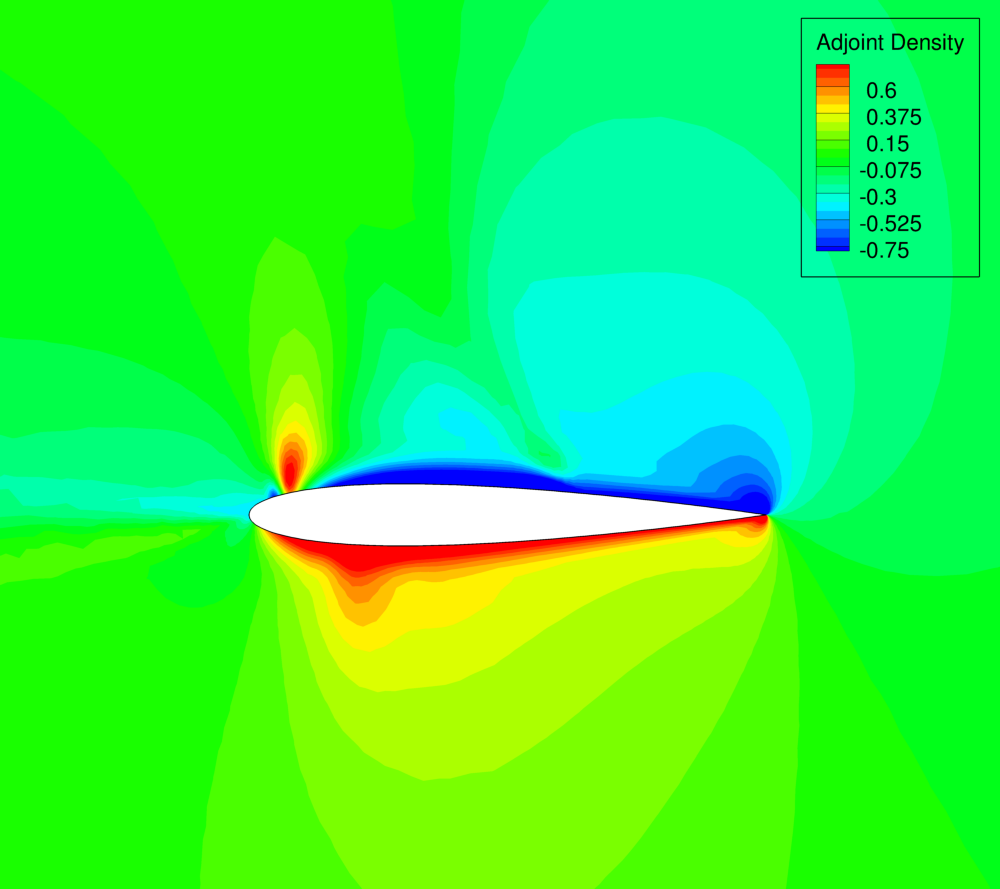 To run this design case, follow these steps at a terminal command line: 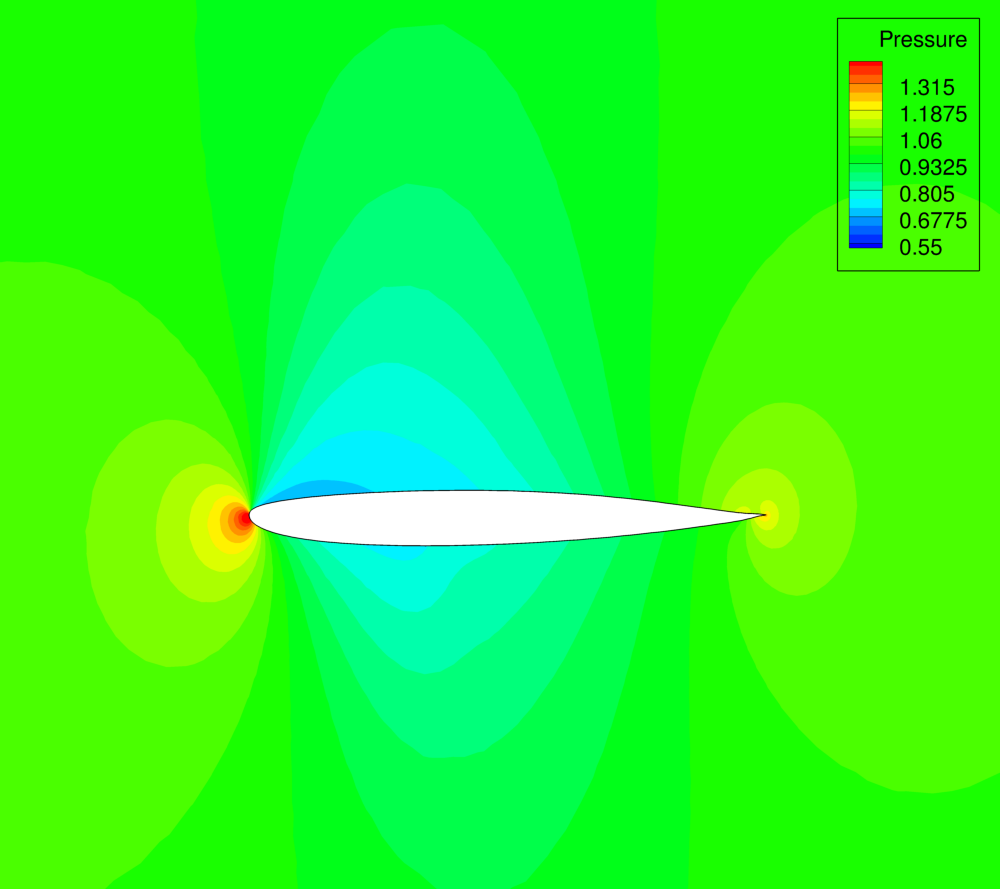 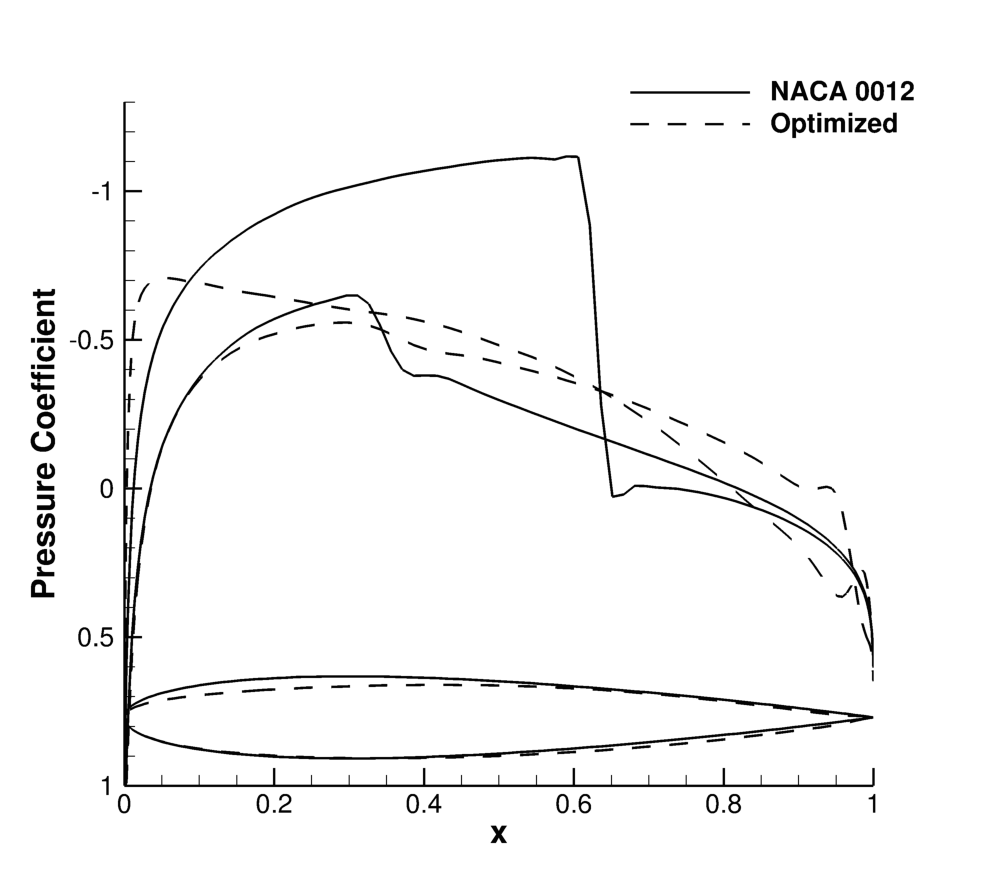 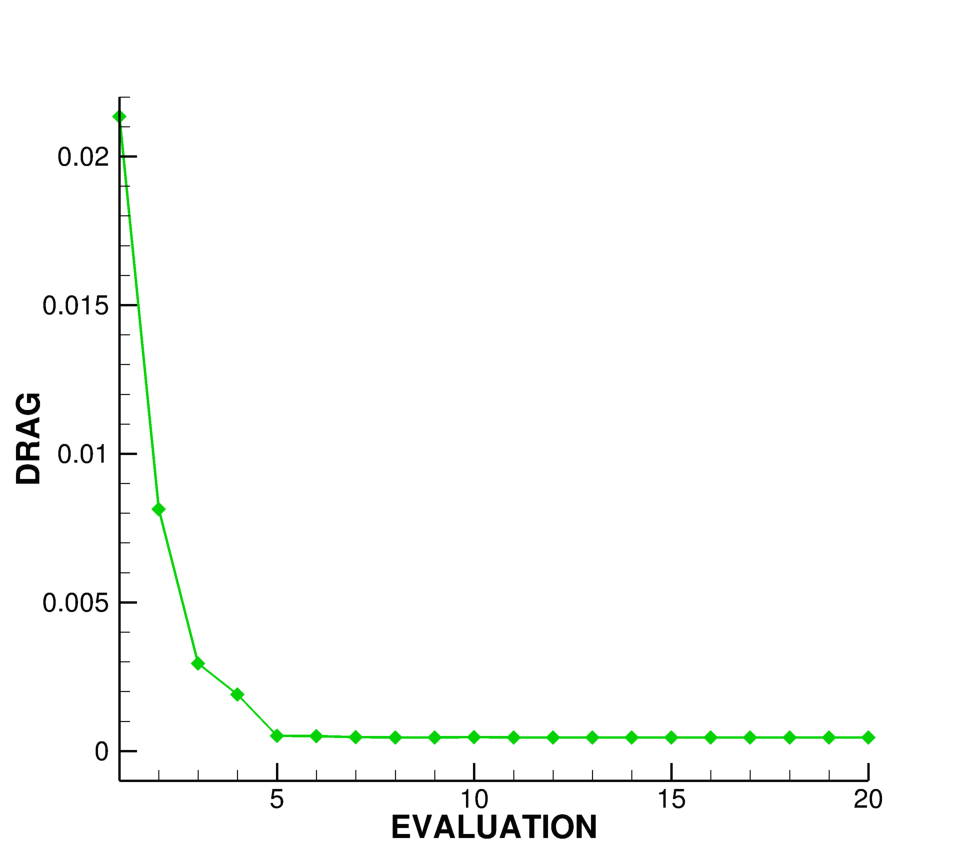