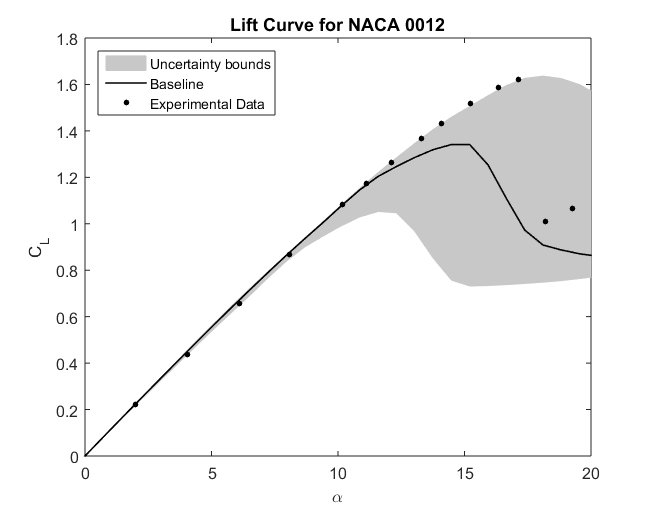 This tutorial covers the EQUiPS (Enabling Quantification of Uncertainty in Physics-based Simulations) module implemented in SU2 that allows for the estimation of epistemic uncertainties arising from structural assumptions in RANS turbulence closures. The test case chosen for this is the NACA0012 airfoil where we will estimate the uncertainty in surface CP predictions at two different angles of attack. Instructions for running an angle of attack sweep to estimate the uncertainty in CL predictions are also provided. The following capabilities of SU2 will be showcased in this tutorial:

The resources for this tutorial can be found in the compressible_flow/UQ_NACA0012 directory in the tutorial repository. You will need the configuration file (turb_NACA0012_uq.cfg) and the mesh file (mesh_n0012_225-65.su2). Note that this tutorial directory contains 5 other configuration files as well. These are for running the perturbations manually and details for that will be covered in the Running Individual Perturbations section.

The following tutorial will walk you through the steps required when using the EQUiPS module for estimating uncertainties in CFD predictions arising due to assumptions made in turbulence models. The tutorial will also address procedures for both serial and parallel computations. To this end, it is assumed you have already obtained and compiled SU2_CFD. If you have yet to complete these requirements, please see the Download and Installation pages.

This test case is for the NACA 0012 airfoil in viscous flow. This is a simple 2D geometry that stalls, and exhibits seperated flow, at high angles of attack. It is a ubiquitous geometry that has significant amounts of experimental data available that allows for the comparison of lower fidelity RANS CFD simulations, to the higher fidelity wind tunnel tests that have been conducted.

The EQUiPS module uses the Eigenspace Perturbation methodology to estimate the uncertainties arising from RANS turbulence closures. This involves perturbing the eigenvalues and eigenvectors of the Reynolds stress tensor to explore the extremal states of componentality, and turbulence production of the flow. Utilizing 5 differently perturbed flow simulations, in addition to a baseline unperturbed flow simulation, the module provides interval estimates on the quantities of interest. Each perturbed simulation results in a different realization of the flow field, and by extension, a different realization of the QoIs. The interval bounds are formed by the maximum and minimum values the QoIs resulting from these 6 simulations.

It is important to note here that these bounds are not informed by the use of any high fidelity data. They represent the range of possible values for the QOIs. They do not assume any probability distribution within them.

This problem will solve the flow past the airfoil with these conditions:

Although this particular case simulates flow at 15deg, the same simulation can be run at varying angles of attack. The results section presents analyses from performing the simulations at a range of angles of attack which allows the exploration of the various flow regimes that occur. At low angles of attack, the flow stays attached and RANS simualtions are quite accurate in predicting the flow. At higher angles of attack, the onset of stall causes flow seperation which leads to inaccuracies in flow predictions.

The mesh used is a structured C-grid. The farfield boundary extends 500c away from the airfoil surface. The airfoil surface is treated as a Navier-Stokes wall (non-slip). This can be seen in Figure (1). 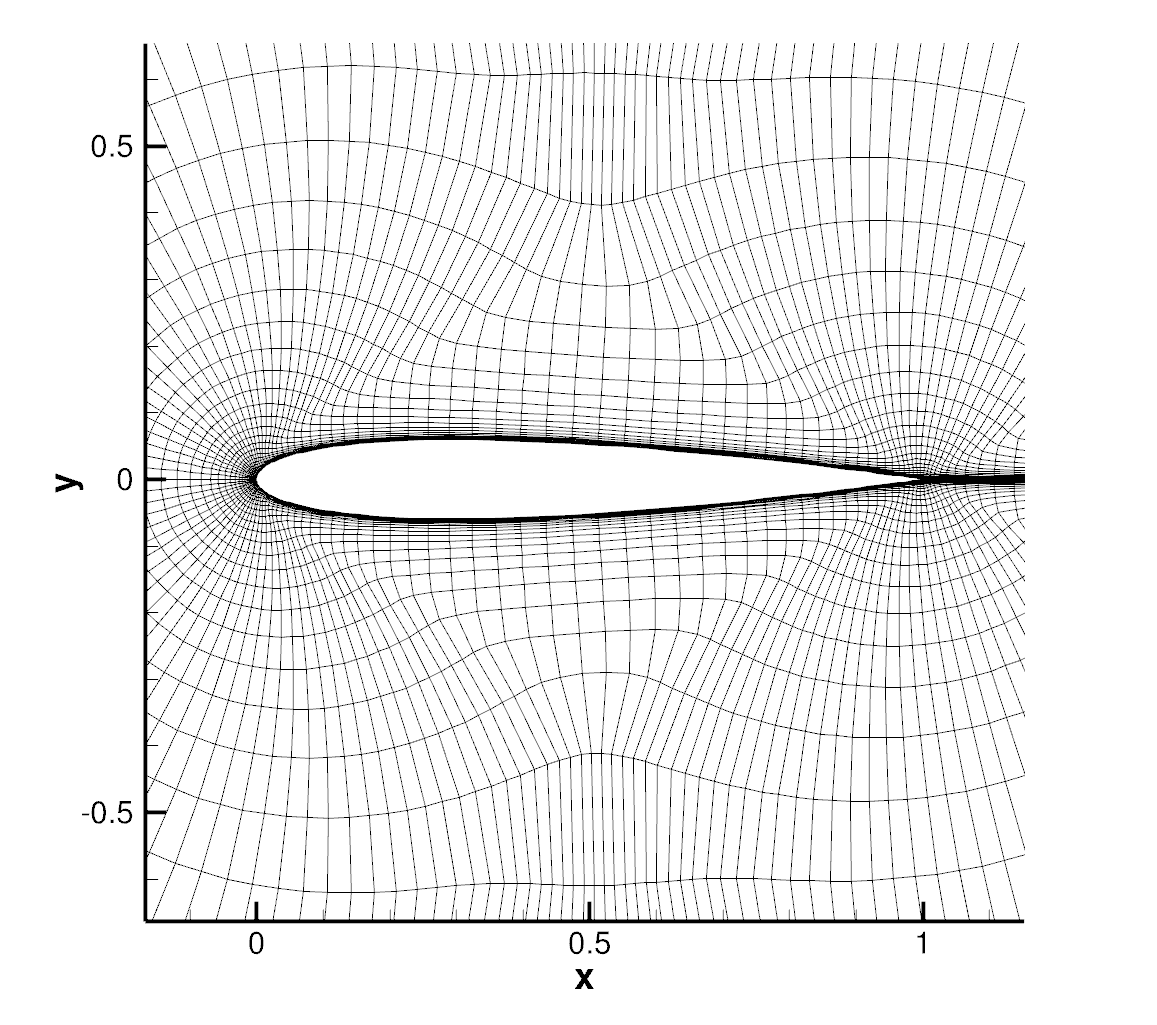 Figure (1): Zoomed in view of mesh near airfoil.

The module is built to be versatile, such that it can be used by experts and non-experts alike. A simple Python script abstracts away the details of the perturbations (componentality, eigenvector permutations) and sequentially performs the perturbed simulations. The script requires a mesh and configuration file that are identical to ones that are needed to run a baseline RANS CFD simulation. For smooth operation, it is best to have performed the baseline simulation with SU2 and have achieved sufficient convergence. This ensures that the configuration file and mesh are well posed, and, if run through the Python script, can provide converged, perturbed simulations. Details in the next section on Configuration File Options are not required to run the Python script. Unless there is a need to perform the perturbations individually, you can move to the Running SU2 section.

If there is a need to perform the perturbations individually (for example to run them in parallel, or on different machines), configuration options need to be set to specify the kind of perturbation to perform.

Specific combinations of UQ_COMPONENT and UQ_PERMUTE are required to perform the 5 perturbed simulations needed to characterize the interval estimates on the QOIs. The combinations are highlighted in Table (1)

Table (1): Combination of options required to perform each perturbation

The correct combinations of these options are also included in the additional configuration files included in this tutorials directory: UQ_NACA0012. These files are named turb_NACA0012_uq_PERTURBATION.cfg, where the keyword PERTURBATION is replaced with the names included in Table (1).

For the sake of uniformity and clarity, it is suggested to perform perturbed simulations in subdirectories named according to the naming convention mentioned in the table. For example, the configurtaion file turb_NACA0012_uq_1c.cfg (which performs the 1c perturbation), and the mesh file should be moved to a sub-directory 1c/. The CFD simulation should be performed within this directory. This keeps with the convention used by the python script.

To run each individual perturbed simulation seperately, configuration options for each simulation need to be defined. For the purposes of this tutorial, the configuration files for each of the perturbed simulations is provided in the UQ_NACA0012 directory in the tutorials. The following steps walk through the process of running one of these perturbations (1c). These steps need to be repeated for each of the perturbations to fully define the interval bounds predicted by the methodology. Follow these steps in the command line.

In order to obtain the interval bounds of a QOI, all 6 instantiations of the flow solution (1 baseline and 5 perturbed) must be analyzed. To illustrate how the bounds are formed, we use the example of the Cp distribution along the upper surface of the airfoil. In Figure (2a) the Cp distributions of each perturbed simulation is plotted along with the baseline simulation, experimental data, and the uncertainty bounds. In Figure(2b), only the individual perturbation data is hidden. 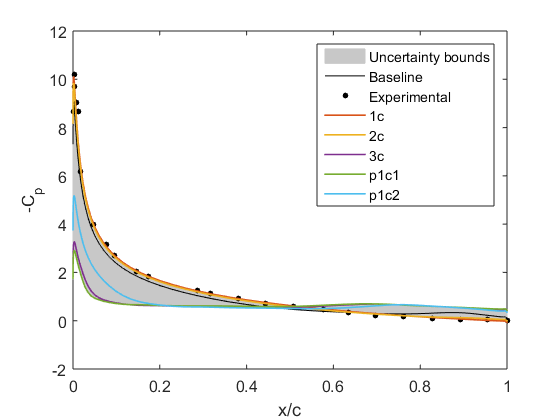 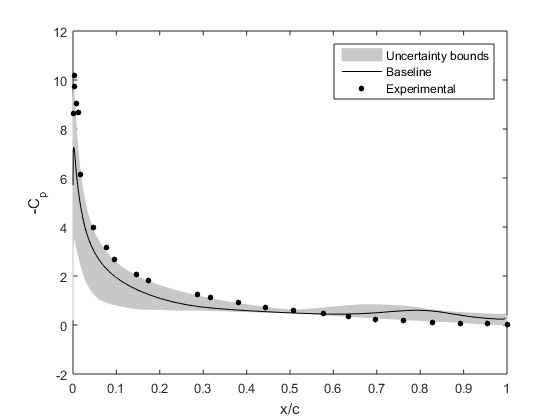 Figure (2): Cp distribution along upper surface for the NACA0012 airfoil at 15deg AOA (a) with individual perturbations included, (b) with only the resulting interval bounds.

The uncertainty bounds are formed by a union of all the states the QOI predicted by the module. It is interesting to see the bounds are larger in areas with correspondingly large discrepancy between the baseline simulation, and the experimental data.

At an angle of attack of 10deg, the baseline RANS model is able to accurately predict the Cp distribution. If the UQ module is run at this angle, it is seen that the uncertainty bounds are much smaller. This case can be run simply using the steps as above, only changing the AOA option for the files. This is illustrated in Figure(3) 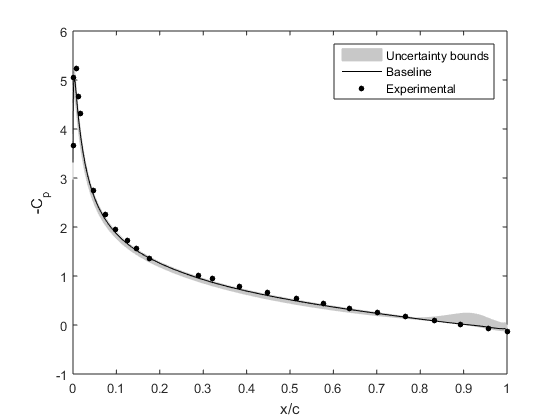 Similarly, if the module is run for a number of angles of attack, the predicted lift curve can be plotted. This showcases the robustness of the model in different flow situations. Figure(4) illustrates the results from a angle of attack sweep from 0 to 20 degrees. 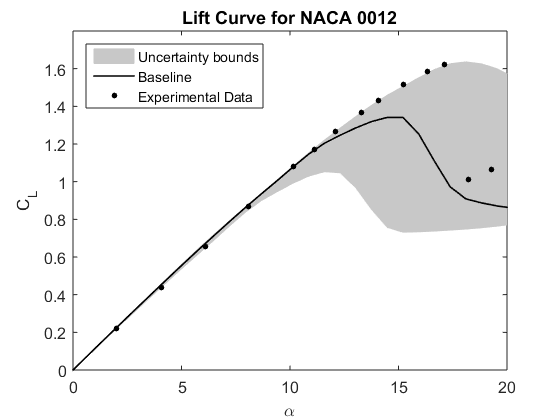 Figure (4): Lift Curve of the NACA0012 with interval bounds predicted by the EQUiPS module.