Upon completing this tutorial, the user will be familiar with setting up and running an optimization problem that addresses multiple objectives and that uses a penalty function to address a constraint. Consequently, the following capabilities of SU2 will be showcased in this tutorial:

The intent of this tutorial is to introduce multi-objective, single-point optimization and explain how this can be implemented using SU2. This tutorial uses the same geometry and flow conditions as described in the inviscid supersonc wedge tutorial.

The capabilities of combining multiple objectives and incorporating penalty functions into the adjoint formulation in SU2 are discussed further in section 3.4 of this work.

The resources for this tutorial can be found in the design/Multi_Objective_Shape_Design directory in the tutorial repository. You will need the configuration file inv_wedge_ROE_multiobj_combo.cfg, the mesh file mesh_wedge_inv_FFD.su2, and solution files solution_flow.csv, solution_adj_combo.csv.

The following tutorial will walk you through the steps required when running a multi-objective optimization problem with SU2. It is assumed you have already obtained or compiled the SU2 executables and python shape optimization scripts. If you have yet to complete these requirements, please see the Download and Installation pages.

The description of the mesh and boundary conditions can be found in the inviscid supersonic wedge tutorial.

If we were starting this problem from scratch, at this point it would be prudent to run the CFD simulation in order to check that it is running as expected - the averaged total pressure along with other one-dimensionalized quantities should be output to the history file. With multiple markers specified, integrated quanties such as the drag are the total over all monitored markers, and additional columns are added to the history file showing the per-marker quantities. Next we look at the options used to specify a weighted sum of objectives for the gradient calculation:

These options define a weighted sum: -1.0E-7 x (SURFACE_TOTAL_PRESSURE at the outlet) + (DRAG on the lower surface). The OBJECTIVE_FUNCTION and OBJECTIVE_WEIGHT options are set automatically during the optimization process, and are used for the calculation of the gradient. If we were starting this problem from scratch, at this point we would run the gradient method desired, in order to confirm that the gradients are being calculated as expected. In this tutorial, the discrete adjoint is used by default. When multiple objectives are specified as shown, a single adjoint solution for a ‘combo’ objective will be calculated, representing the gradient for the weighted sum. The upside of this is that it reduces the number of adjoint solutions required, with the downside that the contributions of different functionals to the gradient value will not be known.

Next the FFD box is defined in order to provide the design variables. The mesh is provided with the FFD box information already included, however when starting from scratch a preprocessing step using SU2_MSH is required. For further detail on FFD, see the Constrainted Optimal Shape Design Tutorial.

We will now go over the options necessary to specify the optimization problem. The example below shows settings for a weighted sum of total pressure integrated over the outlet surface and drag evaluated on the solid wall. Note that the order of the objectives matches the order of the markers where they will be evaluated.

In order to optimize for the weighted sum of objectives:

This tutorial also demonstrates using a penalty function, with the optimization settings shown below. Penalty or barrier functions are functions that increase the magnitude of the objective if it has exceeded a constraint, such that as the optimizer attempts to decrease the magnitude of the objective it is also better satisfying the constraints. In SU2, a quadratic penalty is implemented where if the constraint is violated, the square of the difference between the function value and its constraint is added to the objective. A weighting value is used to scale this function. The syntax for adding a penalty function to the objective is simply to append the same option structure used for OPT_CONSTRAINT to the OPT_OBJECTIVE value, as shown here and in the config file used for this tutorial:

To use something other than a quadratic penalty, the Python scripts must be modified - specifically SU2_PY/SU2/eval/design.py. As penalty or barrier functions are a somewhat rudimentary method of applying constraints, for some problems the OPT_CONSTRAINT setting will have more success although it requires more gradient evaluations per optimizer iteration. Note that this is only compatible with aerodynamic functions, although geometry-based functions can also be included in the OPT_CONSTRAINT setting.

We will now run the optimization problem, minimizing the total pressure at the outflow surface while constraining the surface drag to equal a specified value.

While the optimization problem is running, open the file DESIGNS/DSN_001/ADJOINT_COMBO/config_CFD_AD.cfg. You will need to wait a moment for the initial function evaluation to complete, after which this file will be automatically generated. Search for the ‘OBJECTIVE_FUNCTION’ option to view the adjoint functional specifications. You will see:

The following images show some results for the supersonic wedge multi-objective optimization problem. After 6 major iterations, and 9 total iterations, the value of the combined objective, which adds a penalty on the total pressure to the value of the drag evaluated on the lower surface of the volume, is seen to approach a constant value. The dashed lines indicate minor iterations taken in between major iterations of the optimizer. The output to the screen should look something like this:

The function value listed is the combination of the objective and the penalty function value. Looking at the history of the combined objective, we can see that the combined value has approached a constant value, which is why the optimization problem stopped before reaching the maximum number of iterations. 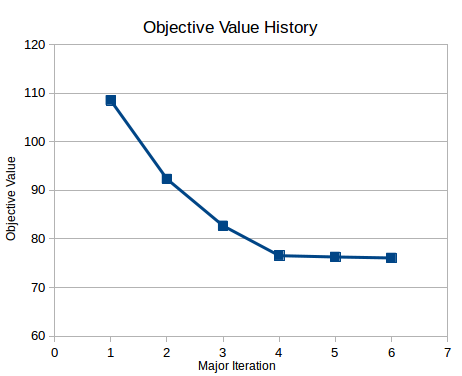 Investigating the history of the total pressure, we can see that the total pressure is still being reduced at the last step, indicating that it could have obtained a lower value if the constraint had not been present, and that the drag value initially oscillates about the specified constraint. 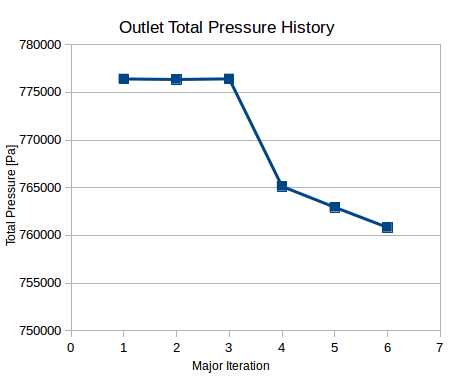 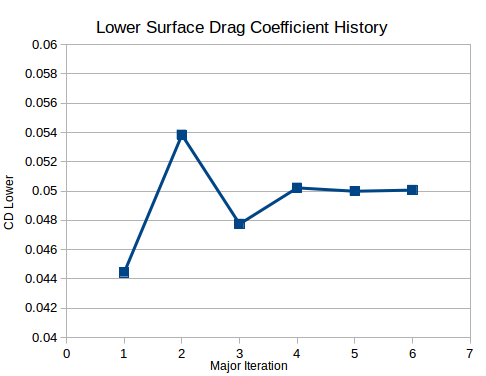 Note that the ‘Cd_lower’ value is plotted rather than ‘DRAG’ because the latter is the total drag over all monitored surfaces.

The geometry change to the wedge can be seen in the following figures. The shock structure of the flow has changed in order to approach the constraint and lower the total pressure at the outflow. 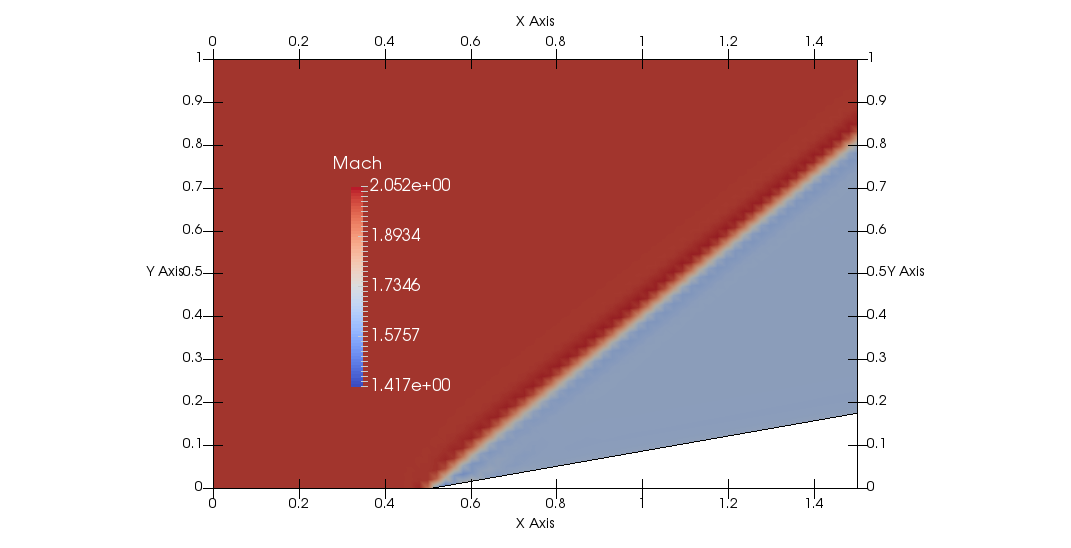 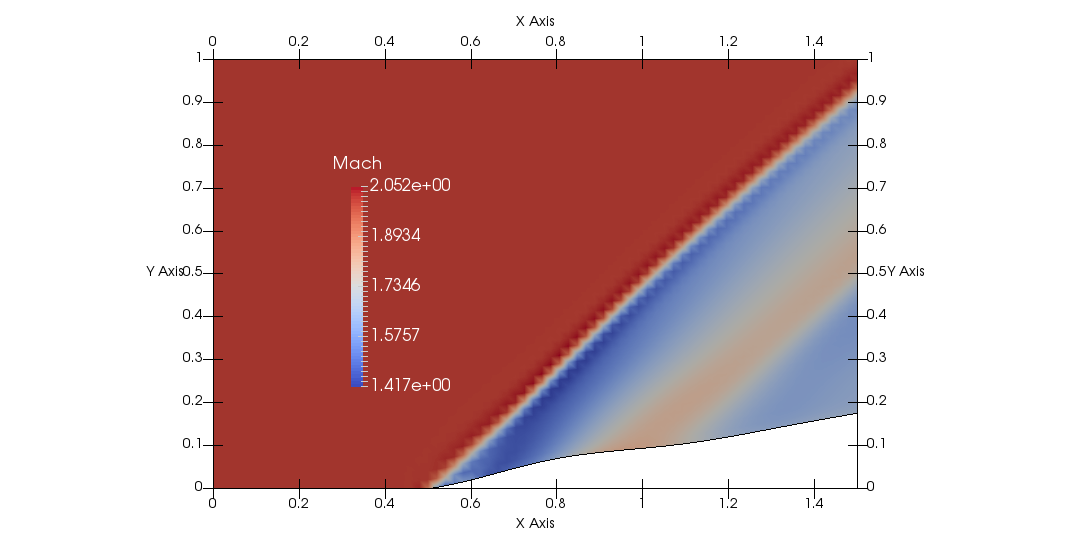 By default, objectives are not combined, and when multiple objectives are listed their gradients will be evaluated sequentially. To see the effect of this, first run the tutorial using the files as provided, and track how long it takes to complete on your system. Look in the ‘DESIGNS’ directory, and observe how many subdirectories in the pattern DESIGNS/DSN_*/ADJOINT_* have been generated - there should be one per major iteration. As the next step will overwrite these files, you should rename this directory if you want to save these results.

Next, modify the input file to set ‘OPT_COMBINE_OBJECTIVE = NO’:

Execute the shape optimization script as before. The problem will most likely take longer to complete. While you are waiting for this problem to complete, open the configuration file generated in DESIGNS/DSN_001/ADJOINT_DRAG/config_CFD_AD.cfg. Search for the OBJECTIVE_FUNCTION option, and you will find that the optimization script has automatically set up the adjoint problem for drag on the lower surface.

Once the optimization problem is completed, you should be able to see that a larger number of subdirectories in the pattern DESIGNS/DSN_*/ADJOINT_* have been generated - this indicates that a larger number of adjoint evaluations were used. You may also notice that the problem will take longer to complete, although the same number of optimizer iterations are used.